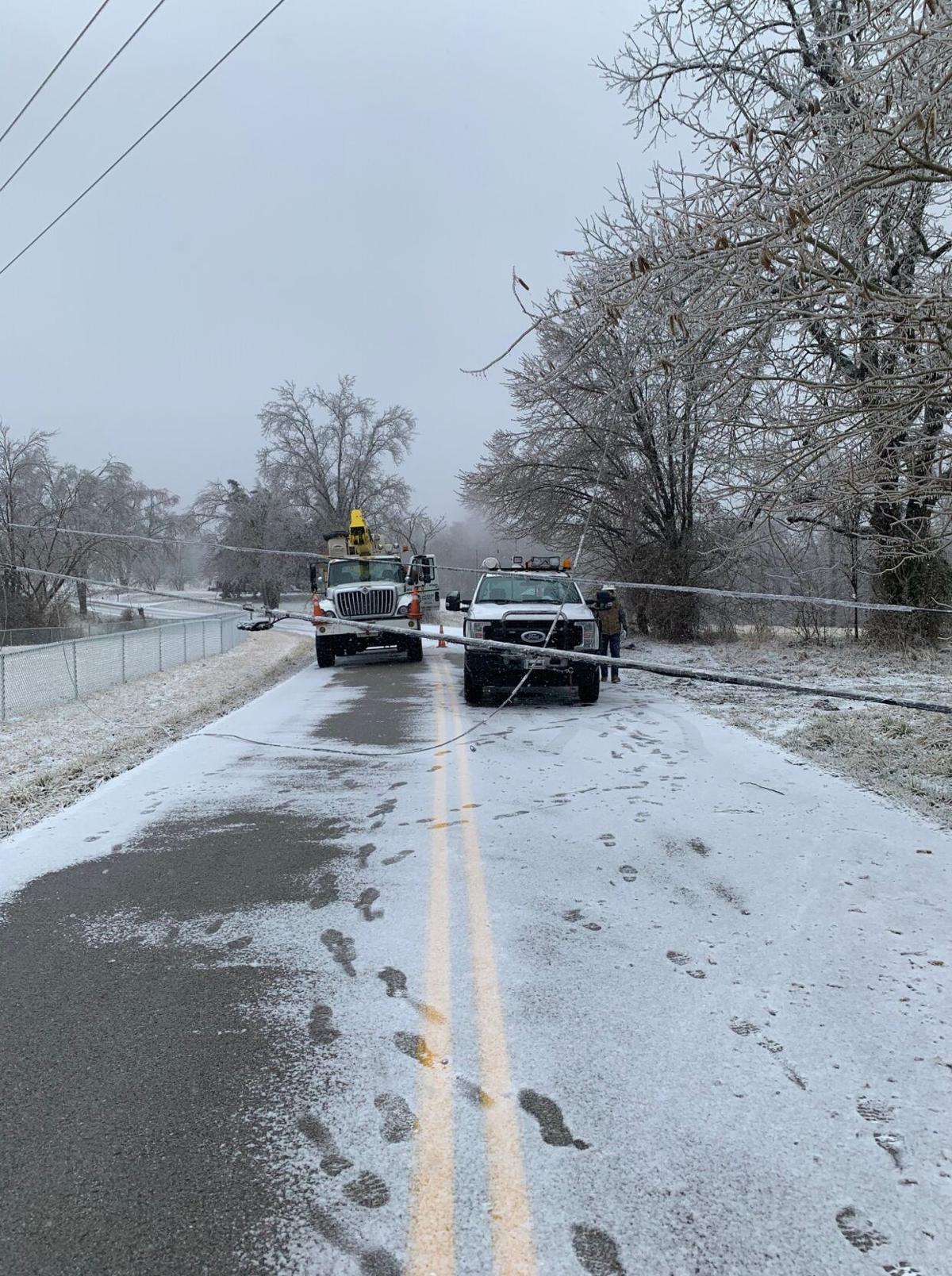 Jackson Energy linemen work on a downed line in Keavy. 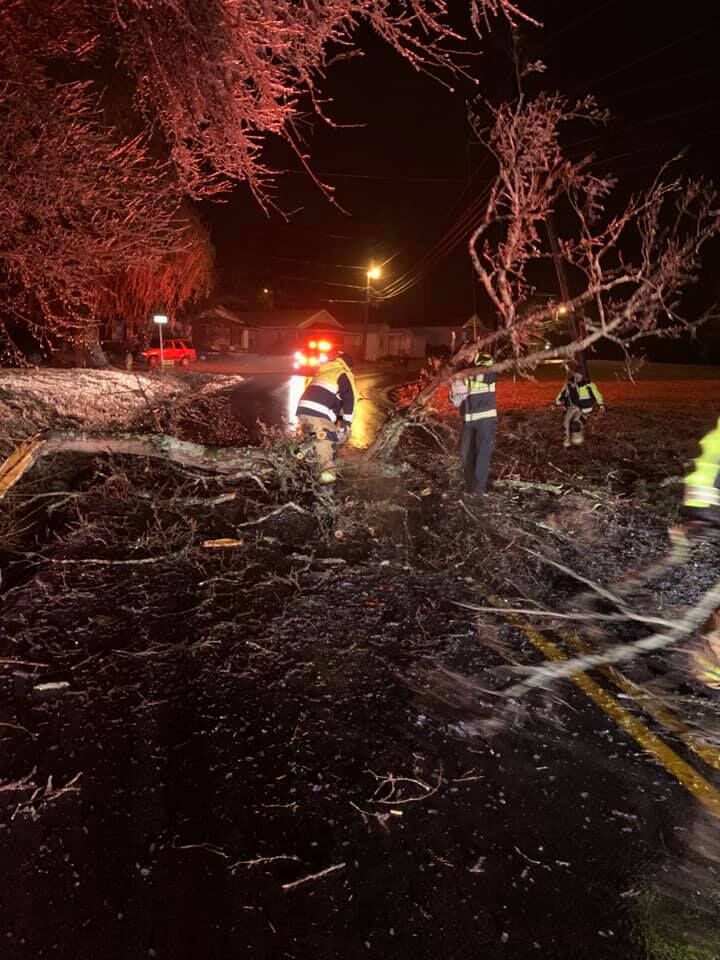 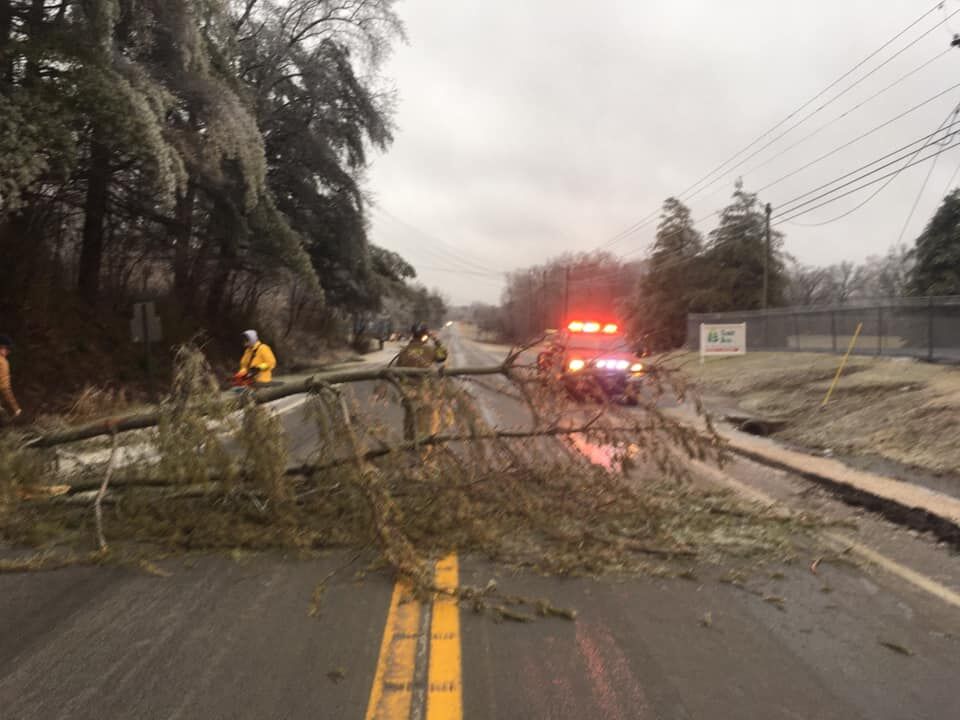 East Bernstadt Fire & Rescue posted this photo showing trees are starting to come down in the area.

Jackson Energy linemen work on a downed line in Keavy.

East Bernstadt Fire & Rescue posted this photo showing trees are starting to come down in the area.

Laurel County has declared a state of emergency as over 9,500 households in Laurel County are without electricity.

Jackson Energy has over 8,000 customers without power in Laurel County and is warning that it may be days before power is restored.

"We currently have 26,000+ members without power in our service territory," the company said in Facebook post at about 2 p.m. Tuesday. "We are working 24/7 to restore power as quickly and safely as possible. However, due to the extent of these outages, it could be several day for full restoration. We do have crews coming other area to assist us in our restoration efforts. If you have a medical emergency, call 911 for assistance. If you can make other arrangements to have heat, be sure to do that. Stay away from any downed lines that could be potentially dangerous. "

Cumberland Valley Electric was working on restoring power on Tuesday as well and had hopes it would be restored Tuesday yet.

The Laurel County Emergency Operation’s Center (EOC) has opened up a warming center for citizens at West London Baptist Church.

The Church is located at 360 Parker Road and those seeking to visit the warming center are asked to call the Laurel Co. EOC (606) 862-7904 prior to arrival. The warming center will be open at 4 p.m. and remain open throughout the evening hours.

However Whitley County was not opening any shelters due to COVID, according to the Whitley Fiscal Court.

A church in Lily also opened its doors for people to seek shelter. Restoration Ministries at 420 Lily School Road was offering a place for those without electric to come stay.

Thousands throughout the Tri-County remain without power Tuesday morning as icy conditions and downed trees continued throughout the night and early morning hours, but the ice storm warning that was supposed to last through 1 p.m. Tuesday has been cancelled.

Jackson Energy had 8,489 customers in Laurel County with outages as of 8:10 a.m. Tuesday.

Cumberland Valley Electric had 1,194 reporting power outages in Knox County and 5,850 customers in Whitley County as of 8:10 a.m. with outages.

Kentucky Utilities reported 2,883 without power in Laurel County and 66 in Knox County as of 8:10 a.m. Tuesday.

Crews throughout the area worked throughout the night and early morning treating roadways and clearing downed trees while utility companies worked to restore power as well.

TRI-COUNTY — A second wave of winter weather began moving into the Tri-County Monday afternoon. This second wave brought freezing rain with the potential of ice accumulations of a half-inch or more for much of the area.

The Tri-County was under an ice storm warning until 1 p.m. Tuesday.

The National Weather Service said snow and sleet accumulations of up to an inch were also possible.

First responders and local officials urged motorists to stay off the roadway and to only travel in emergencies.

Northbound Interstate 75 was shut down at Exit 49 on Monday afternoon due to a fatal crash in Rockcastle County. The interstate had been shut down multiple times throughout Sunday night into Monday morning for crashes and for road crews to treat the roads.

I-75 was then shut down at Exit 41 later Monday afternoon.

Kentucky Transportation Cabinet District 11 crews worked overnight Sunday and into the day Monday to treat roads after the first wave of the winter system moved through Sunday night. Treating roads and plowing during the day made headway in clearing the roadways. The ground gained Monday morning was expected to be lost and road conditions were expected to deteriorate as the afternoon deepens. Hazardous driving conditions were expected and motorists should avoid traveling if possible.

Damage to trees and power lines was expected – a condition that poses its own dangers to KYTC crews and can delay road response work.

During the storm, Kentucky Department of Highways crews will work 12-hour shifts, focusing on keeping high-priority state routes, such as interstates and parkways, passable. Crews then concentrate on heavily traveled state routes before turning to lower-volume routes. With the expected ice and arctic temperatures, Kentuckians should be prepared for several days of hazardous road conditions. Snow priority maps for each county can be viewed online at http://SnowKY.ky.gov.

Motorists should avoid unnecessary travel. If you must drive:

- remember to reduce your speed

- give drivers of snow plow trucks adequate space when following

- don’t drive on the shoulders of the road

- do not try to pass a snow plow truck

Power outages had been reported throughout the Tri-County as of Monday afternoon.

Trees were coming down around the Tri-County due to the weight of the ice.

CLOSINGS/DELAYS: Monday closings and delays due to weather

First responders reporting several crashes due to slick roads, urging not to travel

The following are closings/delays we have been made aware of:

Laurel County under state of emergency, warming center opened up

LONDON — At 10:30 a.m. on Tuesday, Laurel County Judge Executive David Westerfield declared a state of emergency. With over 9,500 households i…

Lily church opens its doors as shelter for those without power

LILY -- A church in Lily is offering a warm place for those looking to seek shelter from the cold.

Baptist Health Corbin’s Vaccination clinic will be open during normal hours 8 a.m. to 4:30 p.m. at the Corbin Center. However if you feel that…