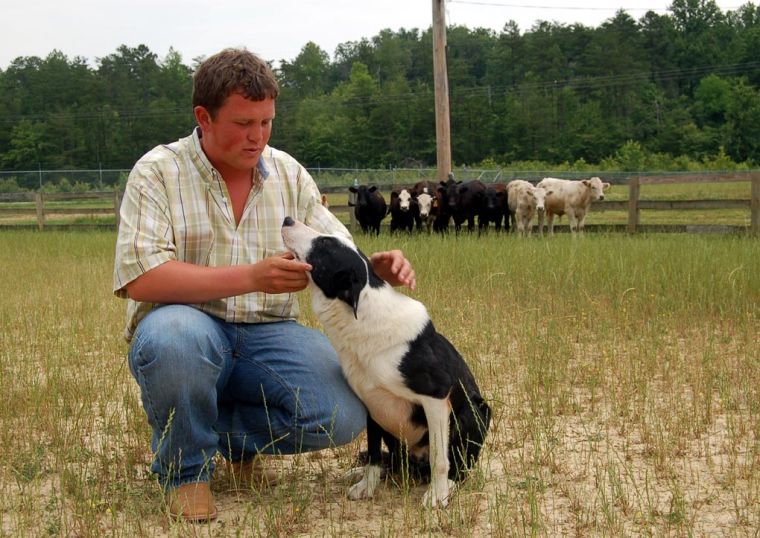 Buck rounds up a herd of cattle during a demonstration at the Laurel County Ag Fair.

Buck rounds up a herd of cattle during a demonstration at the Laurel County Ag Fair.

Buck Butler stood in the show ring Friday with every muscle taut with anticipation. In front of him stood a herd of cattle, lolling, munching, curious. When he was given the command, Buck slowly approached the herd, stepping carefully, drawing out one of the cows. She approached him tentatively. “Push!” Grant Butler said quietly, and Buck reached up and grabbed a hold of the cow’s nose, upon which she cowered back. It was immediately clear there was a new boss in the show ring. His name was Buck Butler. The show was part of a demonstration at the Laurel County Agricultural Fair put on by Buck and Grant Butler. Buck, a 6-year-old Border Collie, has been meticulously trained to herd cattle since he was a puppy. Buck and Butler travel the country offering dog-training workshops and putting on demonstrations about the usefulness of herding dogs in farming. Butler was young when he was first introduced to the concept. “I was probably just 12 years old,” he said. “I was in Colorado on vacation when I got a look at some dogs. Before we left, the owner gave me a magazine about it and I started from there.” Three months later, Butler got his first dog, Mick, and started training him on his parents’ Texas farm. Using verbal commands to control the dog’s movements, he had varying degrees of success. That changed when, at 16, Butler got Buck. “He taught me what I know,” he said. Watching Butler and Buck handle a herd is impressive, with Butler constantly giving commands and Buck responding to them instantly. “From watching him work, Buck understands cattle and the situations,” friend Glenn Williams said. “He doesn’t really have to have commands.” “And he’s able to move cattle aggressively, but smoothly,” friend Billy Smothers added. In fact, Buck does it so well, Butler is sure a ranch hand riding on an ATV could not do it better. “The cattle do not stress, won’t run off weight, don’t run through the fence,” he said. “He calms them.” Smothers agreed. “One dog can move cattle better than five people,” he said. They also cost a lot less. “It takes about $3 a day to properly maintain a dog,” Butler said. “All a dog needs is a warm, dry place to stay and adequate feed and water. The cowboy wants the paycheck, a case of beer and a truck to drive.” Indeed, Butler doesn’t give Buck any special treatment. He sleeps in a dog kennel, is fed regular dog food and, under no circumstances, gets a treat. “They’re strictly a source to get the work done,” Butler said. And work they do. “He’ll do it all day, every day,” he said. “All they ask for is a pat on the head and, on a hot day, some water.” Since getting Buck, Butler has branched out into dog breeding. He focuses on raising Border Collies, as well as dogs of the Hangin’ Tree breed. “They’re a lot alike, real similar,” Butler explained. “Hangin’ Tree dogs are not as stylish or as pretty though. I always called them crude cattle dogs.” It’s something he enjoys doing. “There’s nothing better than doing something you’re good at and you love doing and making a living at it,” Butler said.

Sorry, there are no recent results for popular articles.