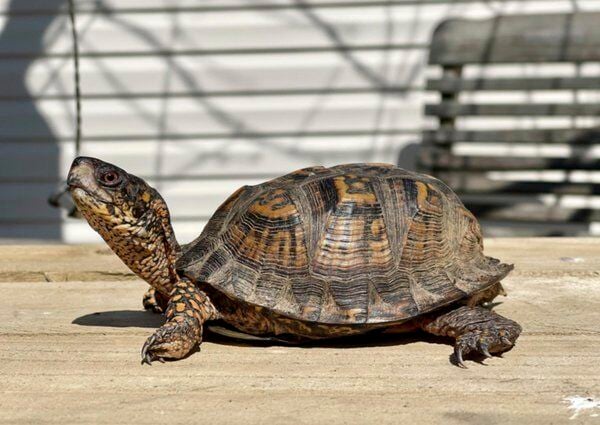 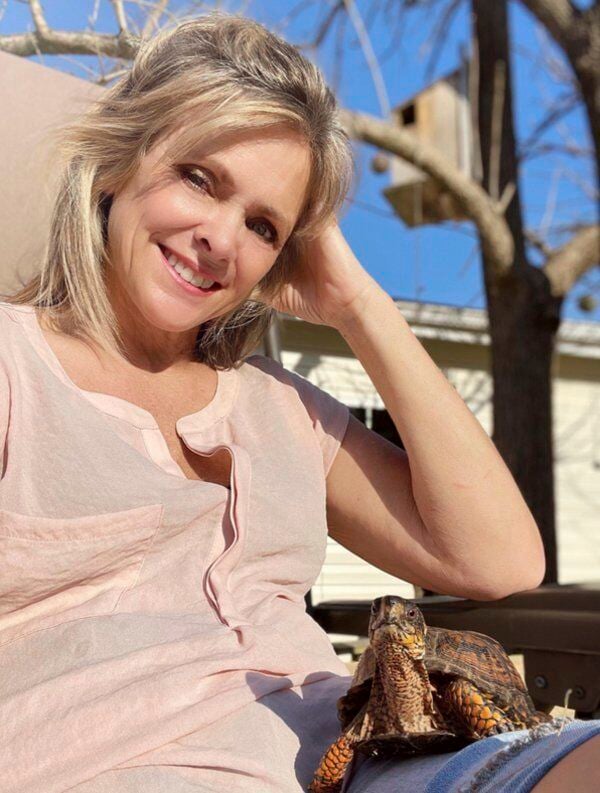 Meet our ambassador, Tuck, he is an Eastern Box Turtle and he came to us because hikers found him and noticed that he was missing his right hind leg, so now he gets to help educate people about his kind because we are licensed through the USDA to use our non releasables as educational ambassadors. Tuck gets around pretty good to just have three legs.

These turtles are classified as reptiles. I was raised calling them a “Tarpin” (correct spelling is “Terrapene” which is actually the genus name of a turtle so my papaw wasn’t far off of the ‘official’ name) and one of the most common turtles seen in the wild. They are found near ponds, fields, meadows, and woodlands throughout the eastern half of the United States. They are omnivorous and will eat almost anything, including berries, insects, roots, flowers, eggs, and amphibians. Adults are about 6-inches long, toes are slightly webbed, mouth is hook shaped, females have brown eyes and males have red, the carapace (shell) is dome-shaped and has furrows (lined shell patterns) that develop with age (usually get 2 a year so to figure age you count them and divide by 2). Tuck is around 13 years old! In captivity they can live to 100 years old. They have hinged plastron (bottom of shell) that allows them to pull in head, tail and all their legs for a complete closure, which helps them survive predator attacks, although it doesn’t help them from vehicles and they can’t completely close it until they’re at least 5 years old.

Contrary to what I was raised to believe, Box Turtles do not shed their shells. Their shells grow with them, as stated above, and develop growth rings. Their shell does regenerate when damaged.

It is absolutely NOT safe to paint their shell. Painting it poses a lot of dangers and it can even be fatal. The shell is made of keratin like human nails and therefore chemicals penetrate into the turtle’s body. The paint can hinder their ability to absorb vitamins they need from the sun, cause respiratory problems, allow toxic chemicals into the bloodstream and will make them ill or cause death.

Mating is usually in early spring and eggs are laid around June. Females dig down in the dirt and lay their eggs. Did you know that the temperature during incubation is what determines the sex of the babies? Colder temperatures will make more males, hotter temperatures will have more females. They can lay up to 9 eggs, 1-5 times a year (called a “Clutch” of eggs and a “Bale” of turtles is a group) ! Females exhibit delayed fertility, wherein sperm can be stored in oviducts for several years until conditions are favorable for fertilization and laying. Incubation is 50-70 days depending on temperatures.

Please be careful when mowing your lawn and when driving as that is where most turtles are killed.

Eastern box turtles are diurnal. During the day, the box turtle will forage for food, search for mates, and explore territory. At night, it rests in shallow forms that are scooped out at dusk.

Being reptiles they are unable to tolerate high temperatures, and in the summer are most active in the morning or after periods of rain.

I found a turtle going across the road, what do I do to help? The turtle knows where it’s going! If you want to make sure it doesn’t get hit, safely pull off the road. Pick up the turtle and set it way off the road in the direction that it was headed.

I found an injured turtle. What do I do? Bring it to me or any other licensed wildlife rehabilitator that takes in reptiles.

Where do box turtles go in the winter? Technically, turtles don’t hibernate, rather they brumate. Brumation or winter cool-down is natural among North American box turtles. Brumation allows the turtle to survive the winter when food is scarce and temperatures are low. Hibernation refers to the long sleep warm-blooded animals engage in during winters, such as bats and bears and brumation describes the deep sleep cold-blooded animals as turtles undergo during the cold season. Brumation lasts around 5 months. They dig a hole as deep as they can and go into the brumation period around mid-October. And once the weather warms up and the spring rain loosens the soil, the exposure to sunlight will trigger them to emerge out of their brumation. This usually happens during March/April.

When the temperature drops below freezing, they have the incredible ability to shut down some of their bodily functions while still staying alive! When this happens, blood is shunted to the core of the turtle’s body. Meanwhile, glucose produced by the liver is primarily sent to support the vital organs such as the heart, eyes, and brain. In extremely cold conditions, the turtle’s heart may even stop beating completely, thus making them appear to be dead.

Box turtles can even withstand freezing inside of their body cavity for short periods of time. If the temperature around them drops below 17-degrees Fahrenheit, the fluids inside of the box turtle’s body may begin to freeze. Box turtles can tolerate ice surrounding their lungs, skeletal muscles, or even their brains! Up to 58% of the body water of a box turtle can freeze for up to 50 hours and the turtle would still be able to recover.

My name is Tonya Poindexter and I’m a wildlife rehabilitator licensed by the Ky Dept of Fish & Wildlife, the IWRC and the USDA. If you’d like to inquire about having us do a wildlife educational program or if you find an injured or orphaned wildlife call me at 606-231-7171, mail us at 1505 Court Road London, Kentucky 40744 or go to my website WildernessTrailWildlifeCenter.org, visit our Facebook and Instagram to find out ways you can help or donate.

My wildlife facility, Wilderness Trail Wildlife Center FURWIN is a 501c3 nonprofit charity corporation and we run strictly on donations, which you can take off your taxes. I do not get paid for what I do. I do this because I made a promise to a skunk named Pepē.