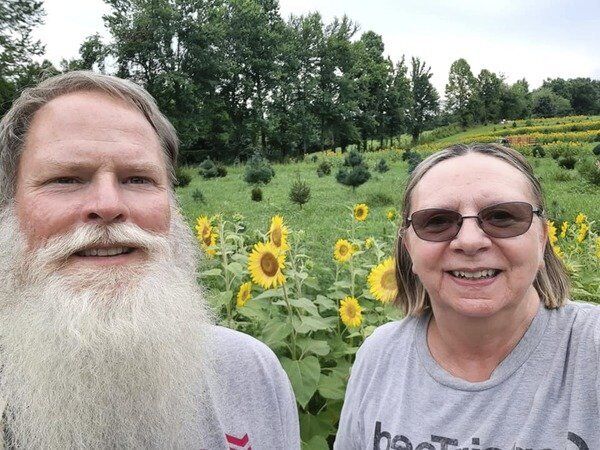 William and Debra Mills pose in a row of sunflowers planted earlier this year on their farm. William says he plans on replanting the flowers again next year. 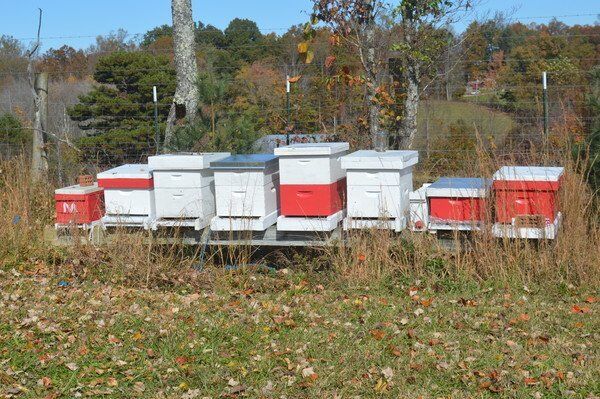 Boxes containing bee hives are painted to differentiate which year Mills first got the group of bees. He currently has 32 hives and hopes to grow that number to 50 by next year. 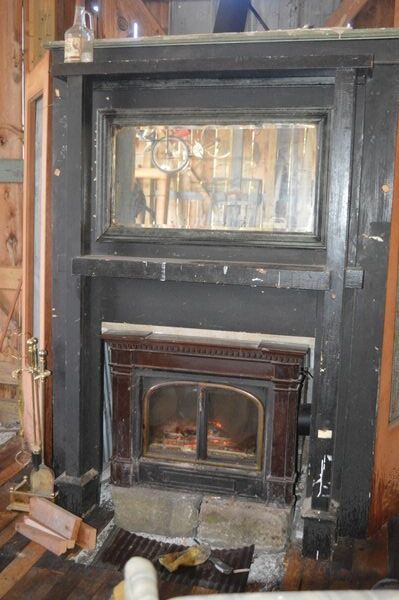 A hand-made fire place built by Mills acts as a center piece and a source of warmth in the Mills' barn. 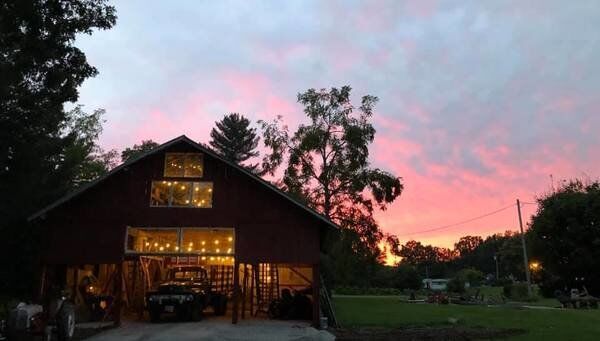 Mills and family began renovating the barn on his farm back in 2000. 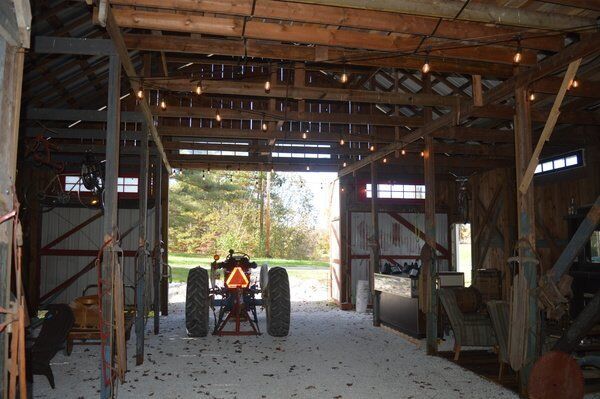 Mills hopes to eventually turn half of the old barn into an area for local vendors to come and set up show. 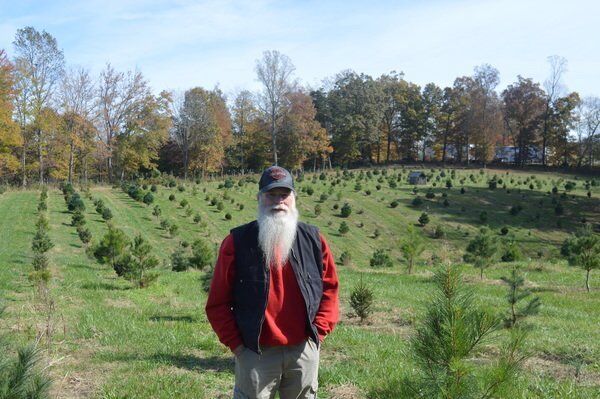 William Mills stands in a field on his farm. Behind him are rows of trees planted since 2017. Mills predicts he's planted close to 3,000 tress in that time.

William and Debra Mills pose in a row of sunflowers planted earlier this year on their farm. William says he plans on replanting the flowers again next year.

Boxes containing bee hives are painted to differentiate which year Mills first got the group of bees. He currently has 32 hives and hopes to grow that number to 50 by next year.

A hand-made fire place built by Mills acts as a center piece and a source of warmth in the Mills' barn.

Mills and family began renovating the barn on his farm back in 2000.

Mills hopes to eventually turn half of the old barn into an area for local vendors to come and set up show.

William Mills stands in a field on his farm. Behind him are rows of trees planted since 2017. Mills predicts he's planted close to 3,000 tress in that time.

Patience. Local farmer William Mills knows all about patience. The fruits of his labor from four years ago are just now getting ripe enough for the picking — or tall enough for the picking, one might say, because Mills isn’t growing tomatoes, carrots, cucumbers, or anything else you might add to a salad. He farms trees, Christmas trees to be exact.

A native of Michigan, Mills said he and his family moved to Knox County, Kentucky, when he was around the age of 8. After some time in Texas, Mills eventually wound-up back in the Tri-County region, settling on a 10-acre farm with his wife, Debra, in the McWhorter community just outside of London.

“I always wanted [to farm], but never had enough property,” Mills said as he sat, warming himself next to the handmade fireplace he’s built inside the barn on his property. “Then that came up for sale back there behind us,” he added, motioning toward the property out behind the barn. “And I thought well, ‘I’ll just buy it and do it.’ That was in 2017 I guess.”

Mills said that first year, he and a group of friends, who underestimated the amount of work that would be involved, planted about 500 trees. Some of the trees were already four years old when Mills and company planted them and have now grown upwards to six to eight feet tall. The ones that have survived are that tall, that is, as of the original 500 trees planted, about 50 have been able to weather the elements and wildlife and are now ready for harvesting.

“They’re doing really well if I could keep the deer out of them,” noted Mills. “The first two years they devoured everything. It was awful.”

Throughout the years, Mills, who now owns Mills Tree Farm & Honeybees, said he’s planted around 3,000 tress on his farm. He said he’s visited other tree farms that block plant their trees, and that he didn’t like that experience. As a result, Mills has planted his trees scattered throughout 6 acres of his farm. Throughout the week during the spring, Mills can be seen out on his farm in the evenings and on the weekends everyday for three weeks planting tree after tree. Mills can plant anywhere from 500-800 trees in a spring.

“Half of them always die,” he said, before quickly adding, “Well maybe not half, I’m making that up, but a lot,” he clarified with a laugh. “And then some of them are like me, they’re just going to be ugly, that’s the way they are,” he joked.

Mills says he’s planted several types of trees just to see which kind grew the best and the fastest on his property. He says he’s found that White Pines and Virginia Pines seem to grow the best, but he’s planted Douglas Firs, Norway Spruces, Concolor Firs, Redpines, and Loblolly Pines just to make sure.

“I love the heck out of them,” Mills said on the loblolly trees. “But I’ve not quite learned how to sheer them yet. They’re real dorky looking,” he added. “I think kids will love them just because of the name, loblolly, it just sounds fun.”

Mills said the other types of trees grow, but that they typically don’t grow as quickly as the Virginia Pines and White Pines he’s planted. Outside of the 50 trees ready for harvest this year, Mills said the others planted that first year won’t be ready for another four or so years. As a result, Mills said his farm would only be able to sell the 50 or so trees he sees fit for consumers. He hopes that by next year to triple that output and sell around 150 trees. Then the following year, he wants to see that number increase to about 200-300 trees.

But trees aren’t the only thing Mills has growing on his farm, which also features several bee hives. Mills said he originally only wanted two hives, but before he knew it, the number of hives had grown to 32. That can make the spring months even more hectic for Mills, who said the bees start kicking up around the same time new trees are delivered to be planted.

“I say I live in a constant state of triage because I’m only doing what needs to be done right now,” said Mills. “I’ve never been caught up and I don’t think I’ll ever be.”

Mills says he’s succumbed to his love of bees and admits that he wanted to increase his number of hives to 50 this year, but because of backorders caused by the pandemic, he wasn’t able to get the frames and boxes needed. With that said, Mills is confident he’ll be able to reach his goal of 50 hives by next year, but says the new bess won’t produce honey that first year.

“But then in three or four years, if things go well, I’d like to make a lot of honey,” he said. “If I had a train-car full of honey, I could sell it. Honey’s the one thing you don’t have to worry about selling,” Mills added. “It will definitely sell.”

Mills has also planted sunflowers this past spring as a treat for the honeybees and as a photo opportunity for local photographers. He said he has plans to replant the flowers next year. He’s also planted patches of zinnias for his wife, who loves the flowers.

“I’m two or three years ahead of where I wanted to be,” Mills said on his farm so far. “I didn’t think I would sell trees for seven years after I planted them,” he said staring at the fireplace next to where he sat. “I just finished up the fireplace almost,” he said motioning towards it. “I’ve learned to just sit here and look at it, I can’t get any work done for looking at it,” he joked.

The truth is, the fireplace is just one part of the major renovation plans Mills has for the old barn. He says in the future he would like to clear-out one side of the barn and set up an area for local vendors to come and sell their goods.

As for this year, Mills said he would be opening his farm the day after Thanksgiving for those who would like to come and cutdown a Christmas tree. He said he thought about selling pre-cut trees this year to folks, but that suppliers were asking around $75 for a seven-foot tree, and for Mills, “there’s just not enough chicken on that bone.”

“Hopefully that’ll just about tie it up with no more trees than we have this year,” Mills said on being open the day and weekend following Thanksgiving for folks to come and cut trees. “But if not, I usually get home from work at 4 p.m. and we’ll be open until dark until everything is sold,” he said, noting he would be selling honey and wreaths along with the 50 Christmas trees this year.