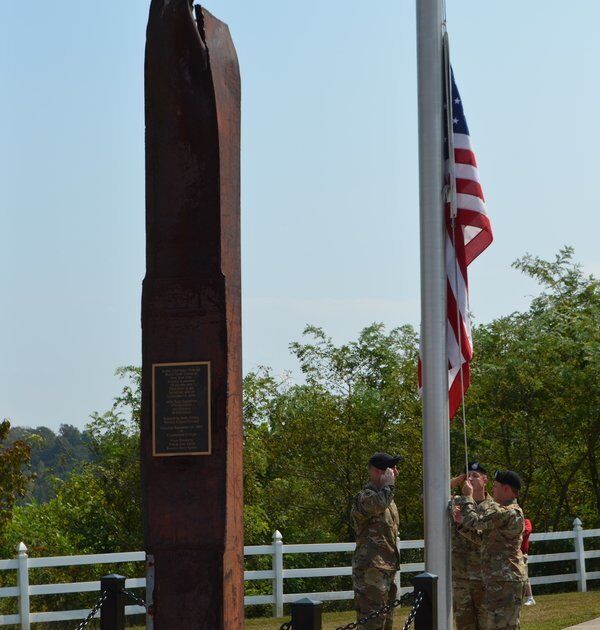 Members of the University of the Cumberlands' ROTC program raise the American flag next to the metal beam during a 2019 event honoring those lost in the attacks on 9/11. | Photo by Jarrod Mills 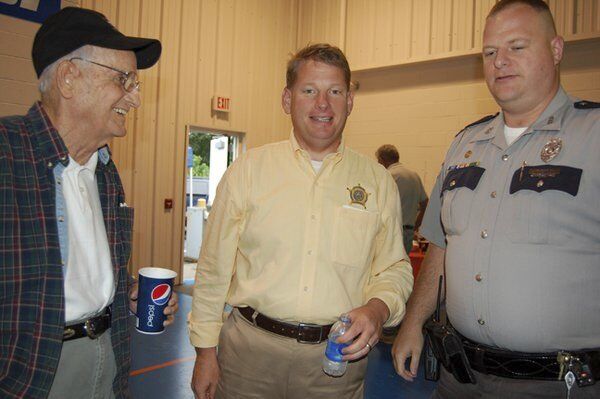 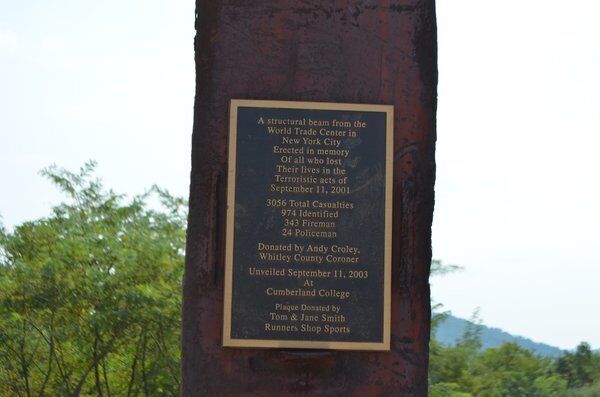 A plaque on the metal beam commemorates those lost during the attacks of 9/11. | Photo by Jarrod Mills

Members of the University of the Cumberlands' ROTC program raise the American flag next to the metal beam during a 2019 event honoring those lost in the attacks on 9/11. | Photo by Jarrod Mills

A plaque on the metal beam commemorates those lost during the attacks of 9/11. | Photo by Jarrod Mills

Just outside of the University of the Cumberlands’ Hutton School of Business stands a tall metal beam. That same beam once stood alongside several thousand others beams in New York City, supporting one of two World Trade Centers destroyed by terrorists on the morning of Tuesday, September 11, 2001.

“Erected in memory of all who lost their lives in the terroristic acts of September 11, 2001,” reads the black plaque installed in the front of the beam in gold text. “3,056 casualties,” it continues, also memorializing the 343 firemen who lost their lives, as well as the 24 policemen killed during the attack.

Croley can recall being at a local radio station on the morning of the attack and hearing about the first plane crashing into the first World Trade Center.

“Of course, at that time no one really knew what kind of plane crash, it was just a very fluid situation the whole day,” he remembers. “It became very obvious that it was an intentional act because of the multiple aircrafts and large amount of casualities.”

Because he was member of U.S. Public Health Service’s Disaster Mortuary Operation Response Team (DMORT), Croley said he can remember thinking he would soon be heading to New York City to help out, but wasn’t sure how he would get there, citing travel and logistical difficulties following flight cancellations as a result of the attack.

“It was about two days later that I finally got there. It was a very sombering experience to come into the airport at the time,” he said on landing at LaGuardia Airport in Queens, New York.

After leaving the airport, Croley then travelled to his hotel, which acted as a staging area for his team. He said members of the DMORT were usually called in to an area following a disaster to assist a local medical examiner’s office with their work. And while he recalls being just one of four officials from Kentucky serving on the team, Croley said there were several corners, death investigators, pathologists, anthropologists, funeral directors, embalmers, and more from across the country willing to lend a hand.

“They would try to keep you two or three weeks at a time, and then have you come back. I know one gentleman, he was a coroner, he was there for months,” Croley recalled. “It was a 24-hour shift of our type of work. I did the day, then I switched to the evening, so we had all different kinds of shifts.”

Croley said officials “got it right” when referring to the site of where the buildings once stood as Ground Zero. He says the site was littered with debris and wreckage from the two skyscrapers.

“You’ve got to understand that was 110 stories times two in about a 15-18 acre area,” he said. “Think about all the power lines, telephone lines, electrical lines, all of the sheet rock. Think about the chairs, computers. Everything you can see in your office right now, times that by about 1,000.”

As many would attest, Croley said the attacks on September 11 affected every American from New York to Whitley County. He noted how younger Americans, such as his own children, were raised in a post-9/11 world where they were being “calloused” to ideas at ages previous generations would have never have thought to have been “calloused” towards.

Croley admitted he had a difficult time thinking back to his time in New York following the September 11 attacks, because it “was just totally different.” And while his first trip to New York was for the most unfortunate reasons, Croley can remember the people of New York being appreciative of the efforts from him and other volunteers.

“The people of New York were so, so very kind, everybody was very appreciative,” he said. “With the type attire and uniform that we had to wear, it was very obvious what we were there doing.

“The firemen, the police, I mean all the workers whether they were steelworkers who were welders or heavy-equipment operators or dump-truck drivers — no matter what part you were, you could see, it was just a very well organized way to help out the city,” Croley said on the overall effort that went into rescuing and identifying victims of the attack. “We were just a very small part of it.”

As coroner of Whitley County, Croley was no stranger to working alongside first responders back in September 2001. Since that time, he has hosted an annual community cookout dedicated to first responders in Whitley County. And while the pandemic has forced Croley to cancel this year’s event, as well as last year’s, he said he is looking forward to hosting the cookout again in the future.

As for the beam on the Cumberlands’ campus, Croley said he believes the university did a wonderful job of presenting it.

“I think I definitely don’t deserve any credit for it, I just felt that it would be symbolic for this area. I don’t know of too many of them around,” Croley said on the metal beam. “The college made a very proud monument out of it. They did it just right. The beam is significant, you don’t need to put anything around it. It just tells a story.”

Students today understand tragedy of 9/11 through video, discussions each year

On the morning of September 11, 2001, Dr. Bruce Hicks was enjoying a swim after he finished teaching two early classes at the University of th…

Veteran reflects on service on 9/11, in Afghanistan

Surviving 9/11 was 'just the first piece of the journey'

PEBBLE BEACH, Calif. (AP) — Twenty years later, Jack Grandcolas still remembers waking up at 7:03 that morning. He looked at the clock, then o…