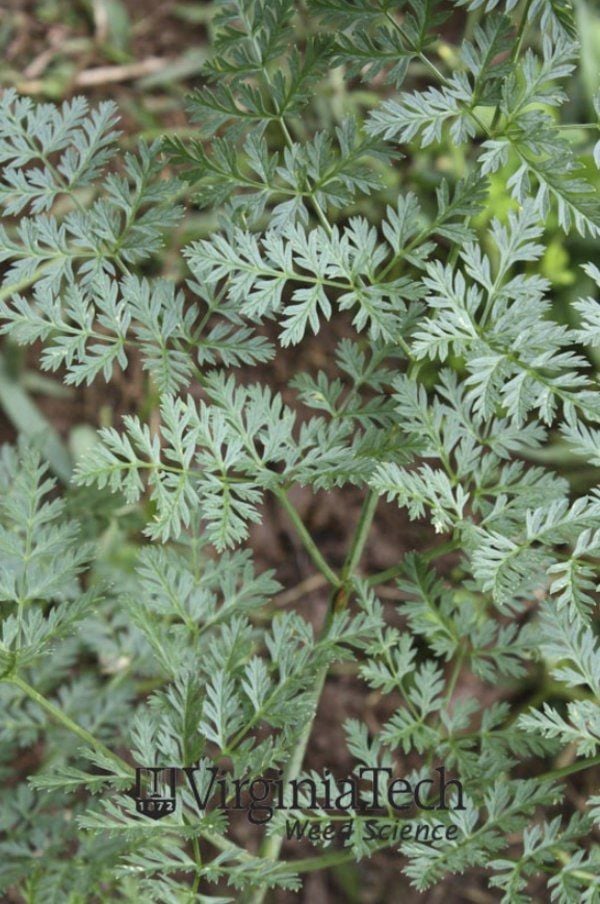 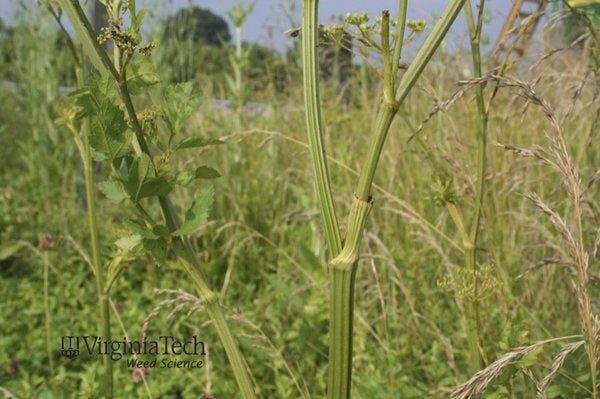 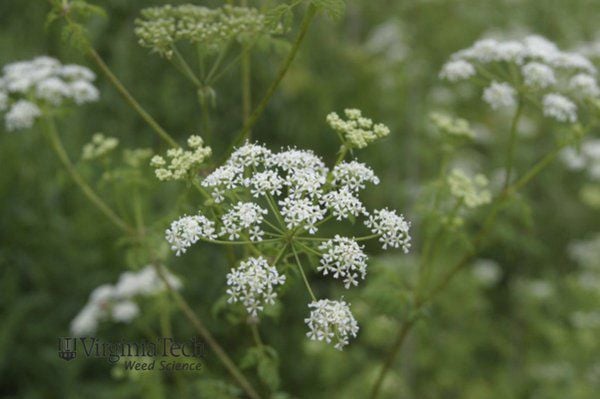 Poison hemlock is toxic to a wide variety of animals including birds, wildlife, cattle, sheep, goats, pigs, horses and to humans.

People are usually poisoned when they eat hemlock mistaken for plants such as parsley, wild carrot or wild anise. Although, cattle seldom eat hemlock, they will if no other forage is available or if it is incorporated in hay or silage. A common question is how much do cattle need to eat to kill them. Unfortunately, the answer is not clear cut. There is considerable variation in the toxic alkaloid content of the plant depending on stage of growth, season, moisture, temperature, time of day and geographical region (southern plants are more toxic than northern plants). The alkaloids have two major effects: rapid, sometimes fatal effects on the nervous system, and birth defects in calves and pigs. Cattle have died by eating as little as 0.2-0.5 percent of their body weight in green hemlock.

Although this plant is often seen along roadways, abandoned lots, fencerows and other non-cropland sites, in more recent years, it has expanded out into grazed pasture lands and hay fields. Poison hemlock is classified as a biennial that reproduces only by seed. It is capable, however, of completing its lifecycle as a winter annual in Kentucky if it germinates during the fall. Flowers and new seed are typically produced in late May and June. Plants emerge as a cluster of leaves that form a rosette. Poison hemlock is most noticeable at this stage of growth in late fall through early spring with its parsley-like leaves which are highly dissected or fern-like. The individual leaves are shiny green and triangular in appearance.

As the plant begins to send up flower stalks, the leaves are alternately arranged on the main stem. Each individual leaf is pinnately compound with several pairs of leaflets that appear along opposite sides of the main petiole. As the plant matures, poison hemlock can grow upwards to about 6 to 8 feet tall. At maturity, the plant is erect, often with multi-branched stems, and it forms a deep taproot. Poison hemlock has smooth, hollow stems with random purple spots along the lower stem that help distinguish it from other similar plants. The flowers, when mature, are white and form a series of compound umbels (an umbrella-shaped cluster of small flowers) at the end of each terminal stalk. Although poison hemlock is often associated with areas that have moist soil conditions, it can also survive in dry sites.

Symptoms of poisoning can occur within 30 minutes to two hours of ingestion depending on the animal, quantity consumed and other ecologic factors. Toxicity varies depending on stage of plant growth, location and environment. Poison hemlock foliage has an unpleasant mouse urine-like odor, detectable when near the plant or when a stem or leaf is crushed, so livestock generally avoid it. Signs of acute poisoning include:

- dilation of the pupils

- musty, mousy odor to breath and in the urine

Although acute disease is a primary concern, an equally serious problem is subacute intoxication of pregnant livestock that causes deformed bones and joints in calves and pigs. For this to happen, cows must eat the plants for an extended period of time during the first trimester of pregnancy. The susceptible stage of gestation for maternal exposure for cattle is from 50-75 days for skeletal defects to occur. These alkaloids continuously reduce fetal movement during tissue formation, resulting in crooked legs, deformed necks and spines. Less commonly, cleft palate results from lack of fetal movement in the head and neck regions at 30-50 days gestation, resulting in the tongue preventing normal palate closure during embryo development.

All parts of the plant, including the seeds, contain the toxic alkaloids. Ingestion of fresh, green plant material may quickly produce signs of intoxication within an hour and last for several hours. Seeds and dried plant material contain the highest concentrations of the most troubling alkaloid. Toxicity may be somewhat reduced in dried plants due to volatility of the alkaloids, but the potential for toxicity still exists, particularly when a sufficient quantity is consumed in dried hay. Seeds are highly toxic and can be a source of poisoning when they contaminate cereal grains fed to livestock. Use extreme caution before feeding animals hay or grain known to contain poison hemlock.

Diagnosis is based on history of plant ingestion, clinical signs and chemical analysis for presence of alkaloids in rumen contents. No specific treatment for poisoning exists. If acute poisoning does not progress to respiratory failure and death, the prognosis for full recovery is good. Avoid overexcitement and stress that may exacerbate clinical signs and result in death.

Public health is a concern when dealing with poisoned animals because of the possibility of alkaloid residues in meat. Elimination of plant toxicants through the milk is a minor route of excretion but may be important when consumed by a calf or a human.

The principle strategy for poison hemlock control is to prevent seed production which can be a challenge since a fully mature plant is capable of producing 35,000 – 40,000 new seeds. It is too late to use herbicide control methods after plants have produced flowers. Therefore, you should use mechanical control efforts such as mowing or cutting down individual plants just before peak flower production to avoid or reduce the amount of new seed being produced.

Make note of areas heavily infested with poison hemlock and begin to look for emergence of new plants in the fall. During the late fall, November, or early spring, March, is the best time of year for herbicide treatment. In grass pastures and hayfields herbicide products containing 2,4-D can be effective when applied to young, actively growing plants that are in the rosette stage of growth. Spot treatments with products containing 2,4-D, triclopyr, or glyphosate can also be used depending on the location.

For more information, visit http://www.ukforestry.org or call the Laurel County Extension Service at 606.864.4167 or visit www.laurel.ca.uky.edu