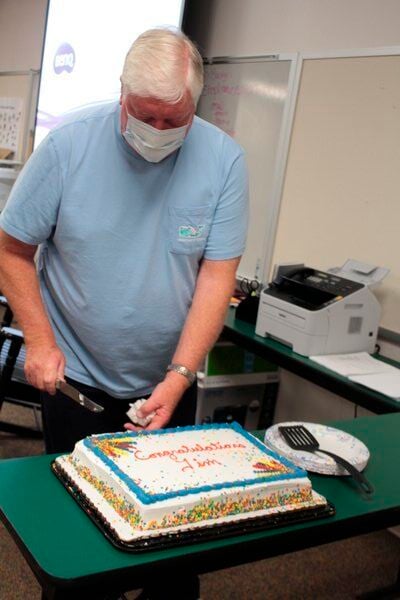 Vorbeck cuts the cake honoring his 45 years of service to the Laurel County Health Department during a surprise party on Friday, July 31. 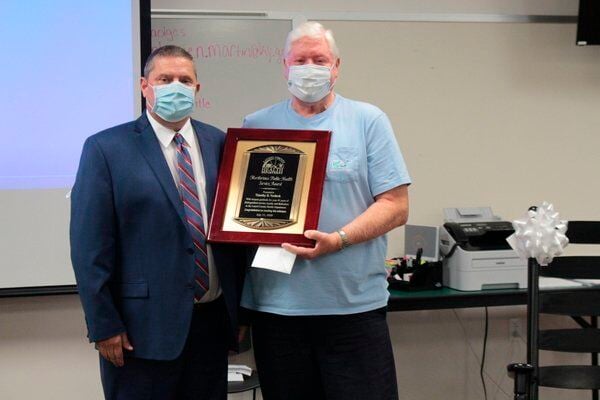 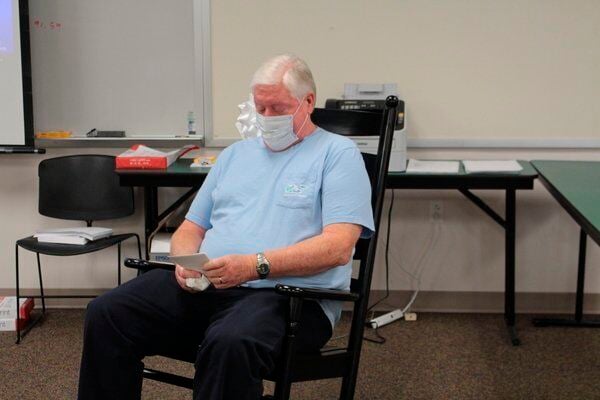 Long time Laurel County Health Department employee, Tim Vorbeck, reads a card from his co-workers who presented him with the traditional retirement rocking chair during a special celebration on Friday.

Vorbeck cuts the cake honoring his 45 years of service to the Laurel County Health Department during a surprise party on Friday, July 31.

Long time Laurel County Health Department employee, Tim Vorbeck, reads a card from his co-workers who presented him with the traditional retirement rocking chair during a special celebration on Friday.

He thought a mandatory meeting for employees of the Laurel County Health Department was going to be an announcement of funding being cut. Instead, Tim Vorbeck got a surprise retirement party hosted by his peers.

Mark Hensley, director of the local health department, commended Vorbeck for his 45 years of service to public health - all of which was performed in London, Vorbeck's hometown.

"Tim has been a staple in this community, a staple to the Laurel County Health Department," Hensley said. "Tim had already been here 15 years when I came here 30 years ago. He's been recruited at the state, federal and local levels but he chose to remain here."

Vorbeck wiped tears from his eyes as his fellow employees paid tribute to his service and dedication for his time in public health.

Brandi Gilley said that Vorbeck was well known throughout the community for his professionalism and kindness to community members as well as his co-workers.

"Tim came in when Mrs. (Ruth) Gaines was here and he was always really really good about giving advice for the future," Gilley said.

Ricky Evans, who worked directly under Vorbeck's supervision in restaurant and grocery store inspections, also commended Vorbeck for his leadership and dedication to the community. Vorbeck conducted the safety and sanitation checks of those facilities, and at one time those rankings were published in the local newspaper. As that department increased in employees, Vorbeck oversaw that division of the health department's duties.

Vorbeck himself returned the compliments from his co-workers, stating that he "couldn't ask for a better job and family."

"When I started here there were 45 regulated businesses established here. Now there's over 700," he said. "That's a testament of good people, a great county. There's no place like Laurel County and I'm lucky to live and work here."

Some of Vorbeck's family joined the celebration which included a plaque presentation as well as presenting Vorbeck with the traditional retirement rocking chair.

"I will use this," Vorbeck laughed.

He did tell one story about his experience in training students who were pursuing careers in the public health field.

"One day Donnie Miller and I were going out to do an inspection and Mrs. Gaines called us back and told us she had a student to take along with us," he said. "I told her I didn't think I could take on another student. That student was Mark Hensley, one of the best I've ever worked with!"

Vorbeck said he was going to spend time with family, especially his children, grandchildren and his wife, Connie, now that he has retired.