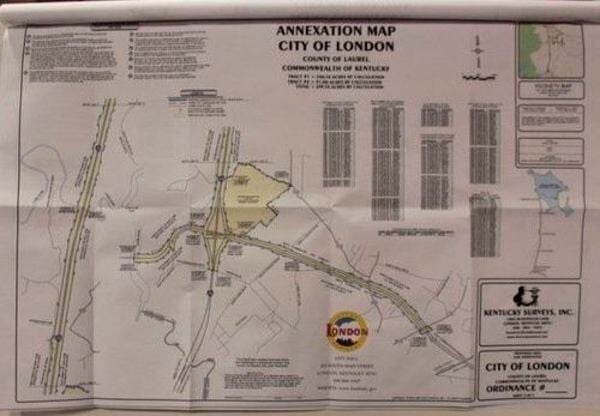 A map of the southern Laurel County property that would be annexed into the City of London should the judge rule in its favor. | File photo 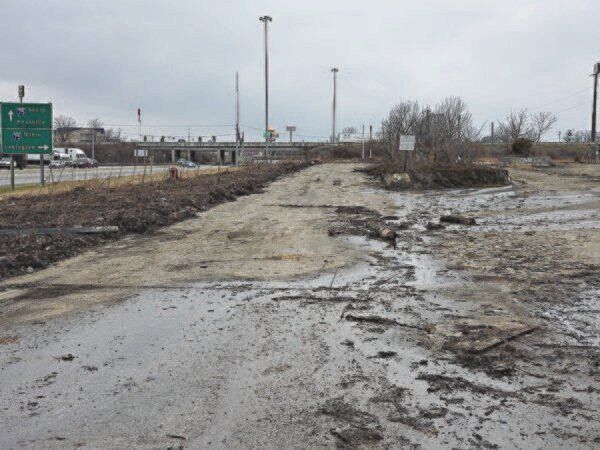 The future of property in southern Laurel County could soon be decided as a judge is expected to issue a ruling in a lawsuit between Corbin and London soon. | Photo by Jarrod Mills

A map of the southern Laurel County property that would be annexed into the City of London should the judge rule in its favor. | File photo

The future of property in southern Laurel County could soon be decided as a judge is expected to issue a ruling in a lawsuit between Corbin and London soon. | Photo by Jarrod Mills

LONDON — After months of submitting written motions and summaries of judgment in a lawsuit that could determine the fate of two tracts of land in southern Laurel County, legal counsel for both the cities of London and Corbin met in Laurel County Circuit Court Thursday morning to present oral arguments in front of Judge Gregory Lay.

Thursday’s hearing comes as the latest chapter of a lawsuit originally filed by the City of Corbin after the London City Council approved annexing two tracts of land in southern Laurel County into the City of London last year. Tract one of London’s proposal is described as territory in the right of way of Interstate 75, the right of way of West Cumberland Gap Parkway and the right of way of Kentucky Route 770. Tract two is described as property located at the intersection of I-75 and W. Cumberland Gap Parkway, which is owned by G&M Oil Company. Together both tracts of land measure approximately 639 acres with 85 percent of that land running along I-75.

“The only reason London has attempted to annex tract one, is because they need it to connect to tract two,” Patrick Hughes, who represents the City of Corbin, the Corbin Utility Commission and MPI Kentucky LLC said during his argument Tuesday. “It’s the stem of their lollypop.”

Hughes also said that state law prohibits simultaneous annexation of more than one tract of unincorporated land when those properties are adjacent to one another. He highlighted how state law also requires that annexed land be adjacent or contiguous to the city wishing to annex the property at the start of the annexation process, and that the land must also be urban in character and suitable for development.

“The only thing that can be done in tract one is the expansion of highways. Nobody lives there, nobody owns a business there,” Hughes said.

During his arguments, Keith Brown, who is co-council for the City of London, cited case law in which a court said that properties being annexed should be looked at as a whole when determining if it is urban in nature and suitable for annexation. Hughes later argued this point saying London wanted the court to disregard its initial ordinance, saying the city went through “great lengths” to define and create two separate tracts of property within the city’s annexation ordinance.

Another part of Hughes’ argument was based on London failing to notify Corbin of its intent to annex. He said state law required London to provide notice, given the fact Corbin owns utility infrastructure within tract two. Brown said London didn’t notify Corbin because it was not required to based on a “rational basis” that it assumed the City of Corbin did not own the infrastructure in tract two, but that it was owned by Corbin Utility Commission.

“To send this notice to the City of Corbin would have meant that we were given Corbin a veto power over this annexation,” he argued. “We had plenty of reasons not to give them that notice.”

Brown argued that the definition of utility infrastructure only refers to the physical pipes and instrumentation of the infrastructure, not the real estate in which it is placed. He pointed to other Kentucky statutes that say city utility commissions are Special Purpose Government Entities (SPGEs) and that they are separate from the city.

“It was perfectly rational and based on substantial evidence to conclude that the city did not own those utility lines,” he said.

Even with London not formally notifying Corbin of its intent, Brown said Corbin had “actual notice” of the situation given the fact it had been covered by local newspapers. As examples he also pointed to how prior to the second reading of the ordinance, the Corbin City Commission hired Hughes to represent the city, that he sent correspondence to the City of London, and that Corbin’s mayor attended the London City Council meeting at which the second reading of the ordinance took place.

Brown said that because Corbin had “actual notice” of London’s intent to annex, it was compelled to submit a certified municipal order objecting London’s action within a timely manner. Corbin never did and as result, Brown said it waived its right to object to the annexation. Hughes said an order was never sent because London never formally notified Corbin of its intent to annex in the first place.

Brown said Corbin would not be subjected to any “material prejudice” if London were to annex the property, and neither would the Corbin Utility Commission given state law says utility rights don’t change because of annexation. Hughes rebutted Brown’s argument saying there wasn’t a statutory requirement of Corbin to show evidence of any harm being done.

“This isn’t a personal injury case,” he said. “This is a failure to comply with a statute case.”

At the end of his argument, Brown provided what he called an “alternative argument” should the court decide London had done something wrong during its annexation process. To remedy this, Brown suggested using the “doctrine of severability” in which the court could decide that London’s annexation is valid, but order that it leave a 2,000-foot gap along both sides where Corbin’s infrastructure is installed.

In the end, Judge Lay said he would take the case in under submission and issue his ruling in writing sometime in the future.