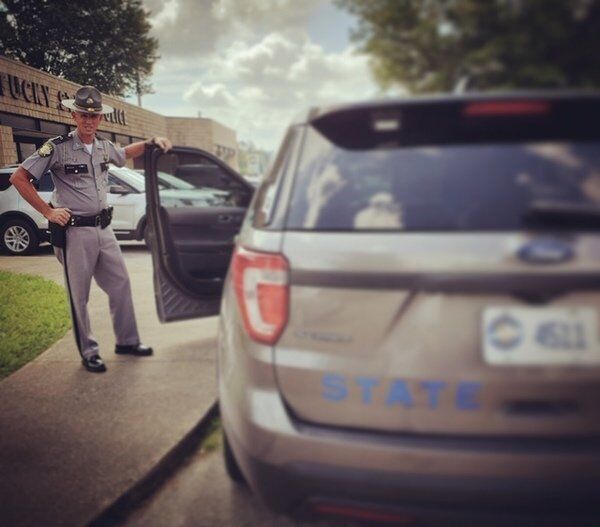 With his last day in uniform, London Post 11 Commander Todd Dalton poses beside the official vehicle he used during his last tenure with the Kentucky State Police. 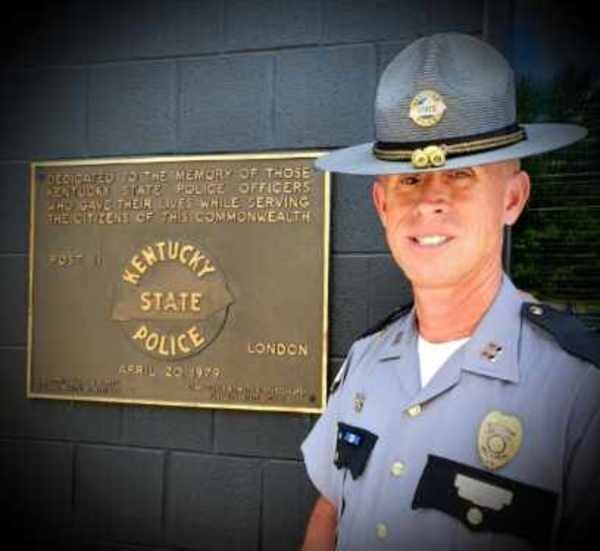 His 31 years of service as Kentucky State Police ended for London Post Commander Todd Dalton on Friday, July 31. Pictured here, he poses by the plaque in front of the London Post where he took his final walk of duty. 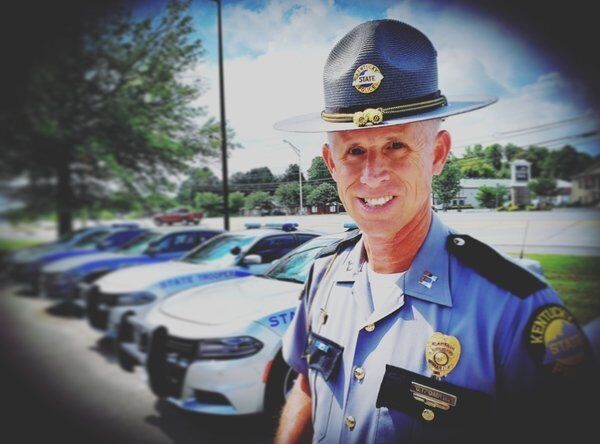 With his last day in uniform, London Post 11 Commander Todd Dalton poses beside the official vehicle he used during his last tenure with the Kentucky State Police.

His 31 years of service as Kentucky State Police ended for London Post Commander Todd Dalton on Friday, July 31. Pictured here, he poses by the plaque in front of the London Post where he took his final walk of duty.

There's a wealth of memories that Todd Dalton took with him when he exited the London Post 11 of Kentucky State Police on Friday.

For one, he is one of the last of his cadet class to retire - Cadet Class #67 in July 1989. But once employed, Dalton was assigned to the Harlan Post with Bell County being his primary work area.

In 1996, he was assigned to the London Post 11 where he worked his native Pulaski County area as a road trooper before being promoted to detective. He vividly recalled the first criminal investigation he spearheaded in that role - one that is unforgettable for most residents in the Laurel and Pulaski County area.

"In September 2000, I was working Pulaski and Wayne counties. The first murder case I ever investigated was the murder of (Pulaski County) Sheriff Sam Catron," he said. "I kept that quiet from the defense attorneys - that it was my first murder case - because I didn't want them to know my lack of experience. But with the help of other detectives, we were able to identify and prosecute the three suspects and they were put in prison."

Catron was at a re-election rally when he was shot and killed by his opponent and two of his supporters. A memorial to Catron is now located near the fire department where the shooting took place.

In 2004, Dalton was sent to Bowling Green where he served as a Sergeant for 11 months before coming back to London. Once back, he served as a Squad Sgt. for three regions of the Post 11 area - Pulaski, Wayne and Rockcastle counties, Laurel and Clay counties and Whitley and McCreary counties. Dalton then moved into the drug enforcement area, serving as Lieutenant for the Drug Enforcement/Special Investigations Unit.

"I worked mostly the white collar crimes on the political level as well as drug enforcement," he added.

In November 2013 he was promoted to Captain and worked in Internal Affairs, which deals with personnel issues. In October 2014, he stepped to the helm of the London Post 11 as Commander - the place where he exited his 31-year career as a Kentucky State Police.

Dalton hails from Pulaski County and is well known in the area. His father worked as a Kentucky State Police trooper for 30 years before his retirement as an Investigative Sergeant. Of those 30 years, the elder Dalton worked out of the London Post.

That established a tradition for the Dalton family, with someone named "Dalton" serving on the Kentucky State Police since 1967. Although there still remains some Dalton blood in that police branch, Todd Dalton is the last of those bearing the name of Dalton.

He holds all police - especially the state police - in high regard.

"I've spent 17 of 31 years out of the London Post, which has one of the highest activity points in the state," he added. "Part of that is because this post is located along I-75 and the Hal Rogers Parkway, but it is a busy place here."

He loved that career, however, and considers it an honor to have served his state and community in that capacity.

"This has been a career of professionalism, accountability and responsibility," he said. "One of the biggest changes I've seen over the years is there are still officers out there who really give a damn. We find so many younger troopers that don't have the dedication to what the Kentucky State Police represents. I'm proud to have worked with some of those who are passing that on to the younger troopers now - Jack Riley and Don Trosper and others I've worked with over the years."

He said some of the accomplishments for which he is most proud is the active shooter programs at public and private schools in the Post 11 areas, which includes seven counties. Most of the city schools in that region have received the training, with all county schools and several private schools following suit.

He is also proud that many troopers at the London Post have been recruited from their home areas, not transferred in.

"We had 32 troopers when I came here, and now we have 42," he said. "That's an overwhelming increase and London is considered blessed to have that many troopers from this post. But the best thing is that we are recruiting more and more local officers."

But his heart is always touched by the yearly Shop with a Trooper event at Christmas.

"It's heartwarming to take a kid less fortunate and give them a Christmas they wouldn't have had otherwise," he said. "But the real highlight is seeing these troopers come out and support that. Some of them are on duty and get paid during that time. But others come out on their own time because they care. I do these in London and Somerset and I never assigned anyone to do the Shop with a Trooper. It did my heart good to look out and see 20 troopers show up for that - most were volunteers that were always willing to help. That speaks volumes for the character of the people here. While he admits that turning in his badge, gun and vehicle was the end of one regime of his life, he looks forward to what he terms as "the next adventure."

"I'm going to take some time to rejuvenate my soul," he said. "The political climate and COVID and all the other things going on in the world, I want to spend some time with my family."

His retirement will also give Dalton some time to pursue his hobbies.

"I'm a competitive crappie fisherman and the National Championship is this fall in Branson, Missouri," he said. "Our team went to the Crappie USA tournament for eight years and in 2014 we finished second in the nation."

While he said he will always be a supporter of law enforcement - especially the state police - he also has some other aspirations upon his retirement.

"The Sheriff of Pulaski County is not going to run for another term and he is a personal friend of mine. So I'm going to run for Sheriff next time," he said. "I've been approached by several people, asking me to run, so now that I'm retired from the state police, I am going to do that."