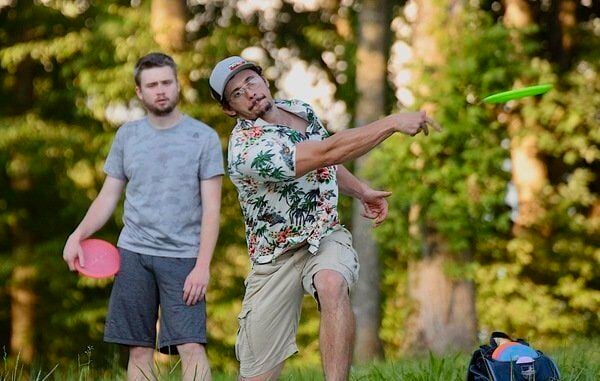 Shane Morgan said working on the weekends allows him to play disc golf at least five days a week. 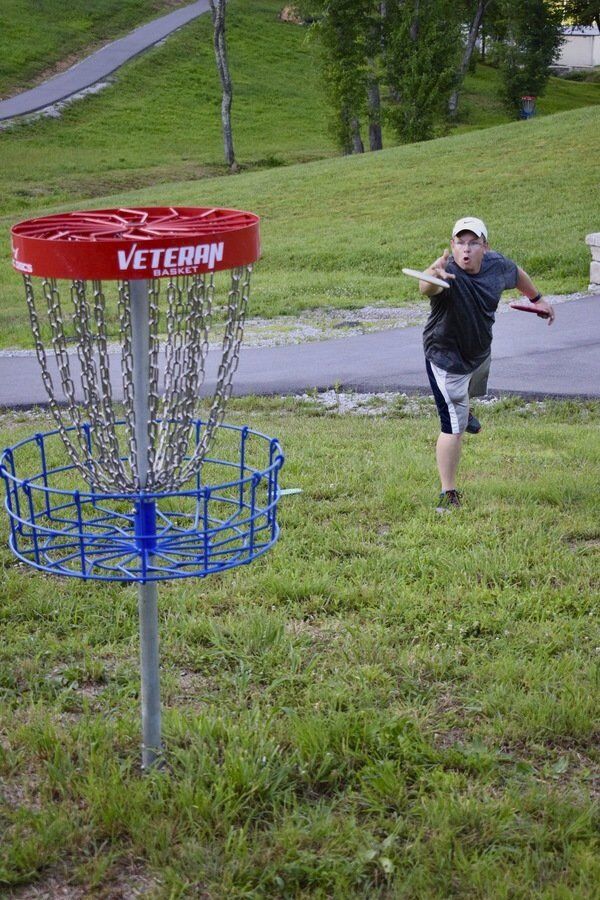 Larry Vaughn makes an attempt at birdie. All the holes at Whitley Branch are par 3 holes. 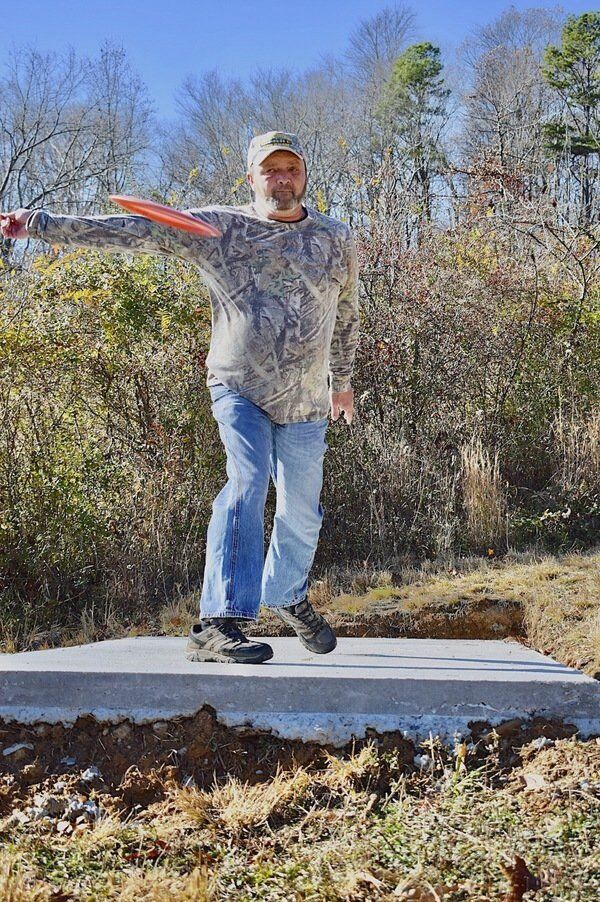 Mike Sowards, who was injured by a mortar round during the first Gulf War, said disc golf has helped his flexibility and overall fitness. He can't make certain throws because of his shoulder. 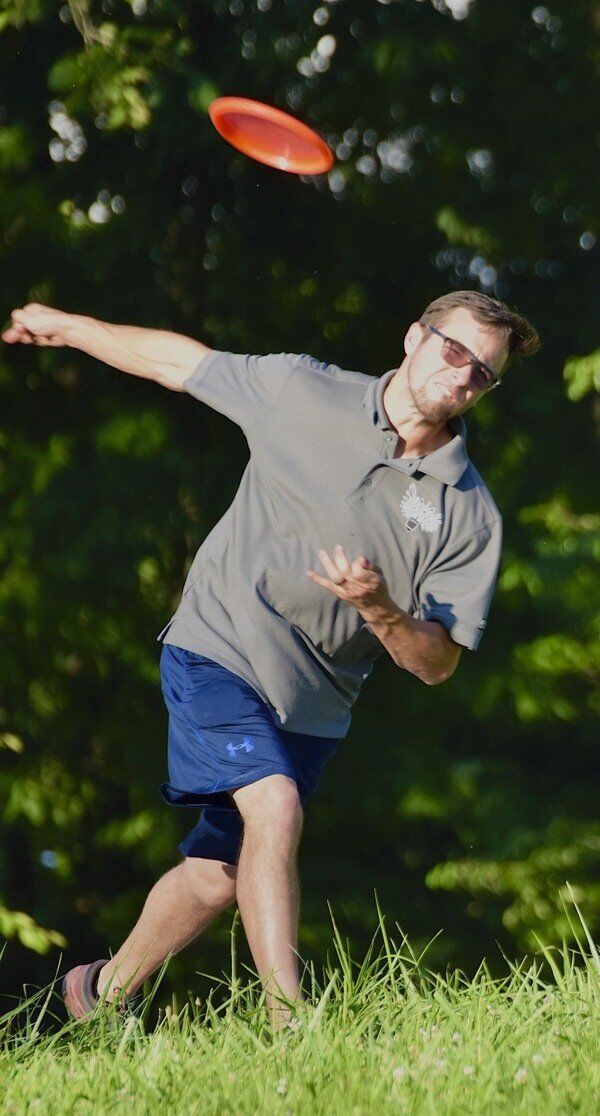 Jordan Infield is a professional disc golfer from Williamsburg who designed the Whitley Branch course. Here, he tees off on number 8.

Shane Morgan said working on the weekends allows him to play disc golf at least five days a week.

Larry Vaughn makes an attempt at birdie. All the holes at Whitley Branch are par 3 holes.

Mike Sowards, who was injured by a mortar round during the first Gulf War, said disc golf has helped his flexibility and overall fitness. He can't make certain throws because of his shoulder.

Jordan Infield is a professional disc golfer from Williamsburg who designed the Whitley Branch course. Here, he tees off on number 8.

The funny-looking metal contraptions at Whitley Branch Veterans Park with chains dangling around them have mistakenly been called a number of things; squirrel feeders, trash cans, bird feeders and even fly traps.

But actually, they are targets used for one of the fastest-growing sports in the world: disc golf. It is played using similar rules to regular golf. Players throw a flying disc from a tee box toward a target, or basket, and continue throwing until the target is reached.

London made an auspicious entry into disc golf last year with an 18-hole course at Whitley Branch that is drawing raves for its accessibility, playability and design.

The front nine holes are mostly flat, which is perfect for beginning golfers and those who want to play a round on their lunch break. The back nine, however, features a lot of elevation changes and has pin locations that challenge seasoned disc golfers.

“Having an 18-hole course in the region is huge,” said Jordan Infield, a professional disc golfer who designed the course at Whitley Branch. “It’s a fantastic course. You have a lot of different elevation changes. You don’t have that a most courses.”

Infield, who lives in Williamsburg, manages the East Kentucky Disc Golf Players Page on Facebook, which he set up to promote and grow the sport in the area. Golfers use it to set up tee times, tournaments and to share pictures and videos. The page had about five members initially, but is now up to 188.

“The sport is really flourishing in the area and Whitley Branch is a big part of the reason,” Infield said. “I’m getting a lot of people asking me how they can get involved and participate.”

Disc golfers will travel in groups to play a course. Whitley Branch attracts golfers from all over Southeastern Kentucky, including a group of 10-15 golfers from Somerset who come to London regularly.

“I’m thrilled to death with the number of people we have playing, especially the people from out of town,” said Mackey Williams, director of London’s Park and Recreation Department. “It’s become a real tourism draw.”

Williams was the vision behind the disc golf course at Whitley Branch after the City of London Tourism commission purchased additional acreage and expanded the park.

“I had been looking at disc golf for a long time,” he said. “I went to courses in Lexington. I knew we could put in a better course than they had. Not a bigger one, but a better one course because of the space we had.”

Williams and Infield, who has a disc golf course design company, walked the layout at Whitley Branch six or seven times to map out the holes and to work out the sight lines so golfers wouldn’t interfere with others using the park.

“The course is designed so it’s not going to interfere with the other park amenities,” Infield said. “Whitley Branch is a very popular park. Like traditional golf, there is so much etiquette that players know not to throw with people in their line of sight or path. Most disc golfers who’ve ever played the game know that’s a priority.”

But unlike traditional golf, disc golf is relatively inexpensive and can be played by anyone. Players can start out with three discs, a “driver,” “midrange” and “putter” that retail for about $10 to $20 each. There is no charge to play Whitley Branch or other courses.

Disc golf can be played in all kinds of weather as well. That’s a benefit for golfers like Mike Sowards and Shane Morgan of London, who play about five days a week in cold weather, wet conditions and stifling heat. Sowards is a disabled veteran and Morgan works at Walmart DC, which allows them to play regularly.

The sport has been a godsend to Sowards, who’s lost 55 pounds while walking the two-mile course and throwing discs at least 54 times per round.

“It’s really helped me with my breathing and my upper body flexibility because of all the turning” he said. “I get around a lot better now than before I started playing disc golf.

Sowards was stationed outside Kuwait City during the first Gulf War and was injured when his vehicle was hit by a mortar shell, sending a piece of shrapnel tearing through his shoulder.

“There’s a few throws I can’t make because of my shoulder, but this is one of the few sports I can play without injuring it,” he said.

A veteran getting healthy while playing a unique sport at a park dedicated to veterans. That’s the promise of Whitley Branch.