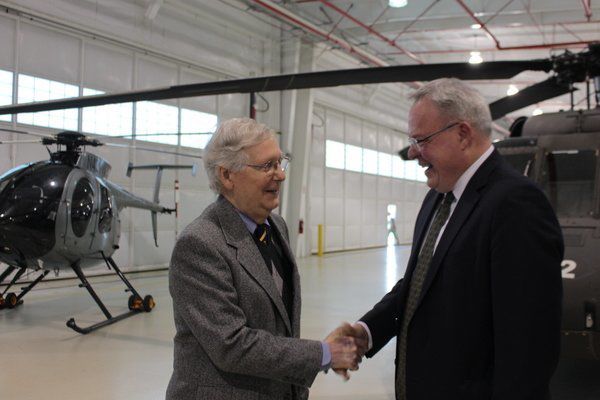 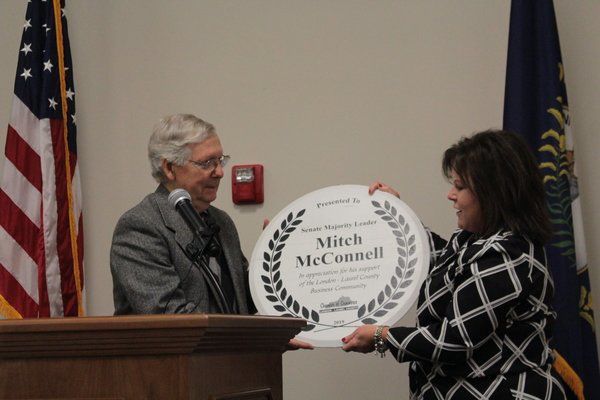 U.S. Senator Mitch McConnell is presented with a painted lid from a bourbon barrel made by Robinson Stave Company by London-Laurel County Chamber of Commerce CEO Deanna Herrmann during a special address before business leaders in London on Monday afternoon. McConnell was recently awarded the 2019 award from the rural electrical companies across the state for his concerted efforts to improve the lives of all Kentuckians. 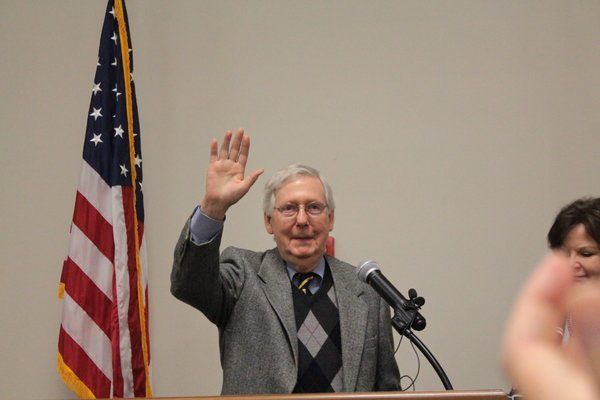 Senate Majority Leader Mitch McConnell waves to the crowd of over 200 people who gathered for a brief meeting at Jackson Energy meeting room on Monday afternoon.

U.S. Senator Mitch McConnell is presented with a painted lid from a bourbon barrel made by Robinson Stave Company by London-Laurel County Chamber of Commerce CEO Deanna Herrmann during a special address before business leaders in London on Monday afternoon. McConnell was recently awarded the 2019 award from the rural electrical companies across the state for his concerted efforts to improve the lives of all Kentuckians.

Senate Majority Leader Mitch McConnell waves to the crowd of over 200 people who gathered for a brief meeting at Jackson Energy meeting room on Monday afternoon.

What is the future of America?

That was the topic of U.S. Senate Leader Mitch McConnell during a special meeting with business leaders in London on Monday afternoon.

While he said every election is important, McConnell stressed his beliefs in the booming economy and workforce of citizens of the country, although he said the ideas of some potential leaders created doubt for their true objectives.

"We're in the middle of a great debate, a debate on what America will be for our children," he said. "We've always been a land of opportunity and we are a compassionate country - half of what the federal government spends is for those who can't do for themselves."

But proposed legislation and ideas could hamper that aspect of life, he added, depending upon the selection of leaders. McConnell listed several popular ideologies in today's society - ideas for which most people do not grasp with the true meaning.

"We have the Green New Deal that would require rebuilding your home, to change or get rid of your car," he said. "People want to go green for the environment. Then there's the idea of Medicare for all - which means Medicare for none, because we won't have anyone to pay for it."

As the Republican leader in Washington D.C., McConnell also defined the Democrats as wanting to add Washington D.C. and Puerto Rico as states. With that action, he said, the Union would gain four more Democratic leaders in the Capitol since both territories currently have two Democrat senators each.

McConnell also touted his achievements in Washington, stating his biggest decision was delaying the appointment of a federal judge during the Barack Obama administration.

He stressed the importance of the 2020 vote, which will not only be the selection of the next President of the country, but will also determine the seats of each party in the House and Senate on the federal level. U.S. Senators will be elected for a staggered term of six years, while the House seats will include a two-year term.

State seats up for grabs in Kentucky will include the Senate election to choose those who represent the odd numbered districts across the state, while those serving in the House of Representatives will bid for a spot in the Frankfort government.

McConnell also attended a ribbon cutting event for the Volunteers of America Mid-States new Hope Center in Manchester. That facility allows addicted pregnant women to reside in the facility and remain drug free during their pregnancy - another effort to battle the prescription drug and opioid epidemic that has enveloped Kentucky and other parts of the nation. He then met with local law enforcement officials to address the issues facing their professions with the illicit drugs and drug trafficking.

Joining McConnell was Jim Carroll, director of the White House Office of National Drug Control Policy (ONDCP), more commonly known as the Drug Czar. Carroll and McConnell praised the efforts of leaders of the VOA for their commitment to serve women and children suffering from opioid and substance abuse and re-define their lives without the effects of drugs.

"It was a pleasure to be in Kentucky today to see the incredible work being done to get more people struggling with addiction the help they need," Carroll said. "The Trump Administration, and all Americans, are fortunate to have great partners like Senator McConnell who choose to devote their time and energy to reversing the pattern of addiction and creating safer communities. Kentucky has made progress in accomplishing our ultimate goal: reducing the number of people dying from drug overdoses."

"As Kentucky continues to endure the unfortunate consequences of opioid and substance abuse, we are reinvesting in comprehensive treatment strategies," McConnell said. "As Senate Majority Leader, I'm committed to supporting the life-saving work of Volunteers of America by championing comprehensive legislation and securing unprecedented levels of federal funding for Kentucky. As we continue to bolster our prevention, treatment and enforcement efforts, we can make important strides to stopping the tragedy of addiction from inflicting pain on more Kentucky communities."

McConnell has been a strong advocate for fighting the scourge of drug abuse and addiction, and has consistently increased federal funding levels to battle the epidemic. Under McConnell's leadership, Kentucky has received more than $240 million to help fight the drug epidemic and recently worked with the University of Kentucky to secure an $87 million federal grant to address opioid crisis in high-risk communities. Due to his innovative approach toward battling the epidemic, Kentucky has evolved into a model program for other states and has been recognized at the national level.