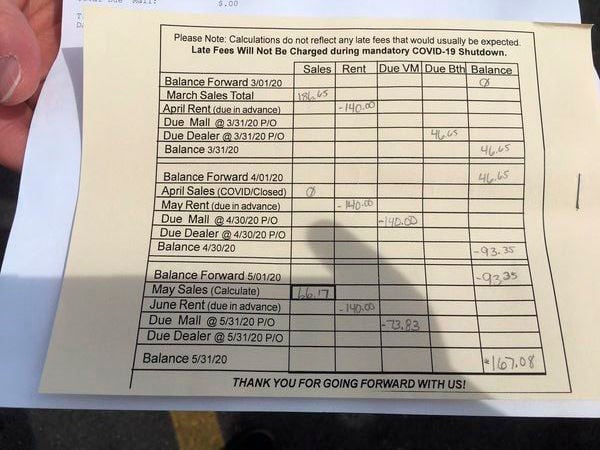 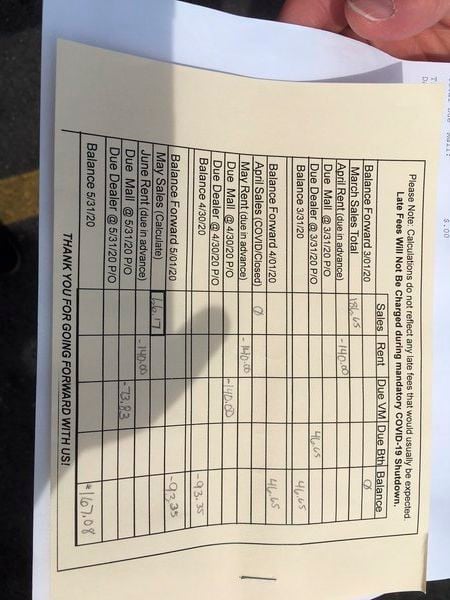 Vendors show their bills they are being asked to pay. 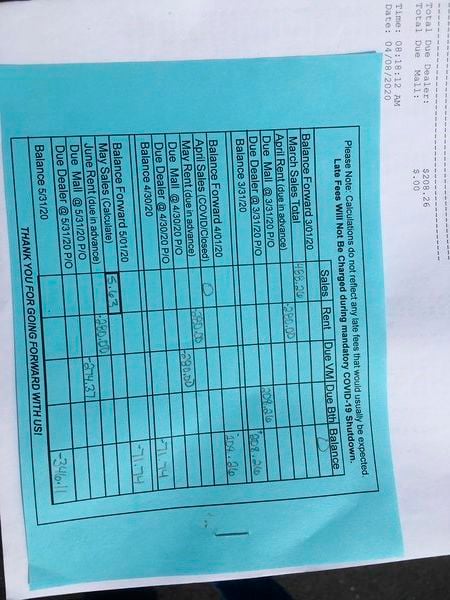 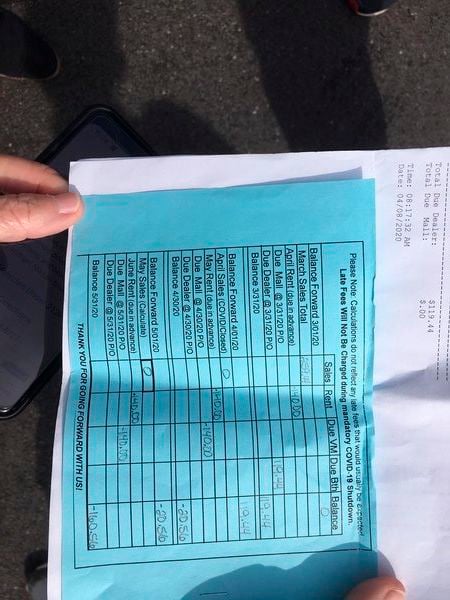 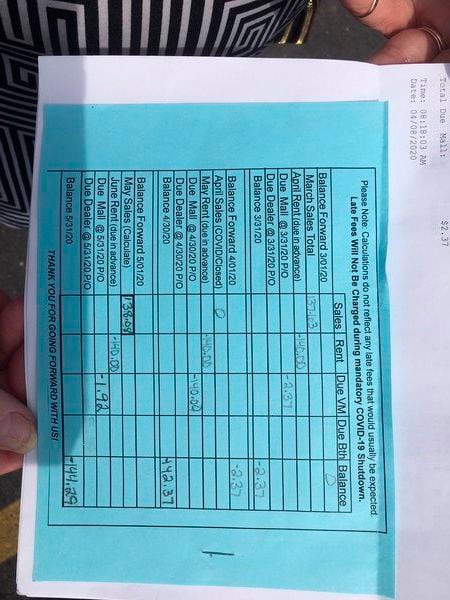 Billing statements received by the merchants of the Vendors Mall in London. Vendors were charged rent for the time the store had been closed due to COVID-19. In addition, some vendors are saying they're seeing sales that never happened.

Vendors show their bills they are being asked to pay.

Billing statements received by the merchants of the Vendors Mall in London. Vendors were charged rent for the time the store had been closed due to COVID-19. In addition, some vendors are saying they're seeing sales that never happened.

Merchants of London's Vendors Mall are planning to file a civil suit against the store's owner. This follows a billing statement Saturday, June 6, charging vendors for rent during the time the store was closed due to COVID-19. This is despite vendors being unable to sell or get access to their merchandise, as well as the inability to get in touch with the owner of the mall, Teresa Mullins.

"We're filing small claims against her [Mullins] -- all the vendors are," said Cathy Pennington, a vendor of the mall. "Everybody has a bill. We've been charged for the whole time during the shutdown, which the agreement that we signed says that if it [the Vendors Mall] is closed, we are not charged!" According to Pennington, these charges are a breach of contract. This is in reference to section 10 of the Vendors Mall Space Rental Agreement, which states:

"Should the Mall ever close permanently with or without notice, the Dealer will receive a prorated return of rent paid within a reasonable period." Rush added that the contract was also broken when vendors weren't given their March pay during April.

Additionally, some vendors found sales on their checks they say couldn't have been possible. One such vendor, Mary Rush, had a transaction worth $5.63 for a pair of socks and a plate for the day the store opened back up May 26. Rush says she, her husband Vernon, and some of their friends were emptying her booth the entire time that day. She explained that one of them was watching the booth at all times and that not a single customer bought anything. Pennington added that she had sales for May when her last sale was when the mall closed March 17.

The Sentinel reached out to Jim Bullard, property management contact at Laurel Plaza Associates LTD. --- the company that acts as a landlord over the Vendors Mall building. Bullard confirmed that the current owner of the mall, Teresa Mullins. Bullard noted he has never had any issue working with Mullins.

Merchants at the Vendors Mall feel as if they haven't been given the same cooperation. The lack of communication during the store's COVID-19 closure, they say, was the straw that broke the camel's back.

"Had Teresa kept communication with us and paid us what we were due in April, we would have worked something out with her," said Pennington. "Because of no communication, we had no clue when it was going to open.

"We were advised the best thing we could do is take her [Mullins] to small claims court," said Rush. "We cannot be out any more money. A lot of people don't have the money in the first place. A lot of people are really hurting. We should never have had to go through this."

Vendors reported that the dates for the hearings of the civil claims were set for June 30, July 13, 20 and 27 and August 10.