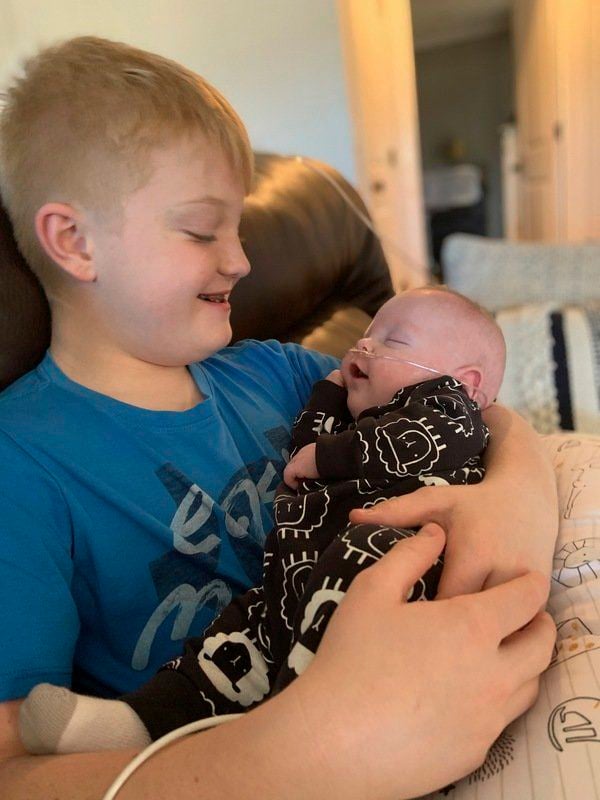 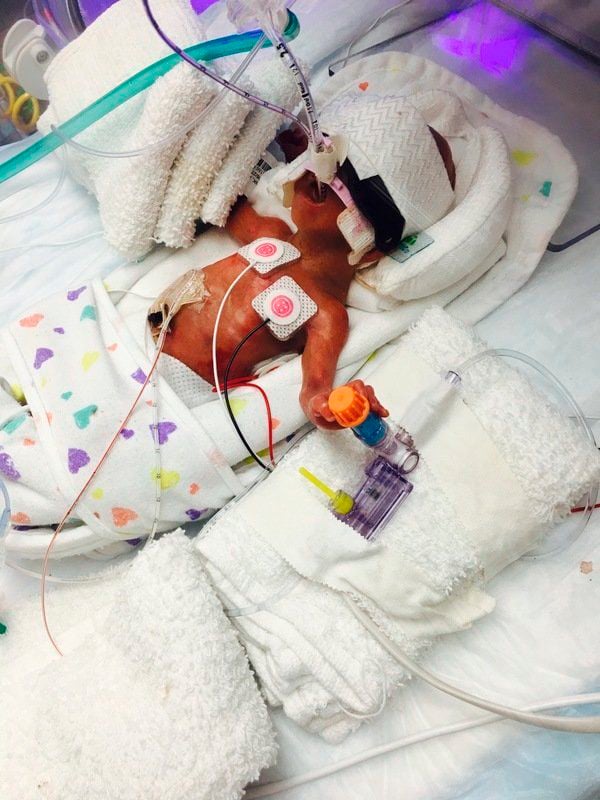 The Strunk family considers their son Baylor who was born almost 18 weeks pre-mature weighing 1 pound and 3 ounces nothing less than a miracle from God. 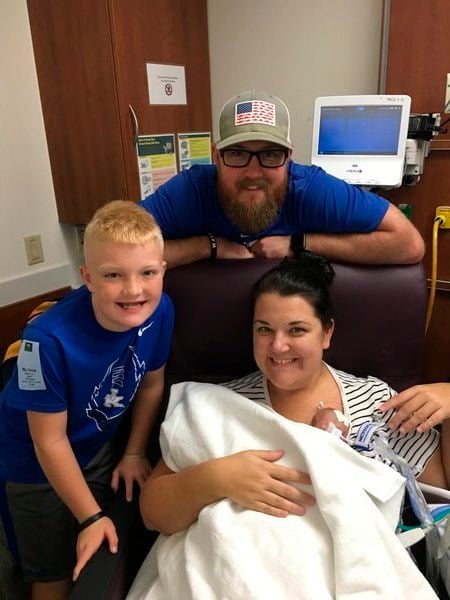 The Strunk family considers their son Baylor who was born almost 18 weeks pre-mature weighing 1 pound and 3 ounces nothing less than a miracle from God.

CORBIN — “He wouldn’t be here if it wasn’t for God,” said Misti Strunk about her 5-month-old son Baylor. “We believe he is a miracle and we want to give all the glory to God his life and his testimony.”

For the past five months Shane and Misti Strunk spent their days and nights living on love and faith, bedding down at the Ronald McDonald House and believing earnestly that God had a miracle planned for them. God did indeed.

The Strunk family considers their son Baylor, who was born almost 18 weeks pre-mature weighing 1 pound and 3 ounces, nothing less than a miracle from God.

Baylor is actually considered a micro-preemie. A micro-preemie is a baby who is born weighing less than one pound, 12 ounces or before 26 weeks gestation.

Although Baylor was breathing when he was born, he could not have lived without being intubated. He is actually the first male “22-weeker” to be resuscitated at the University of Kentucky, said Strunk.

The Strunks, who live in Corbin, did in vitro fertilization (IVF) 10 years ago to get pregnant with their first son, Quinn, and in 2019 the extra embryos were unfrozen and produced twin boys Cooper and Baylor.

On August 24 Strunk knew something wasn’t right with her pregnancy and her husband, Shane, took her to Baptist Health Corbin. Later she was flown to the University of Kentucky for expert care.

“When we got to UK, they let us know they didn’t do anything with 22-week-old babies,” said Strunk. “That was a really hard couple of hours wondering what we were going to do. Finally we talked them into trying.”

When Strunk woke up with a fever, doctors further monitored the situation and found Cooper had passed away. Within a few hours Baylor was born breathing but had to be intubated and he also had a hole in his heart that would need to be plugged.

The five-month road ahead looked long.

The Strunks watched summer end and fall arrive away from their oldest son, Quinn, as they stuck close to Baylor tending to his needs. Holidays came and went but in the heart of winter the family of four gathered under one roof as Baylor arrived home on Friday.

“Honestly it is crazy all they have done with this baby,” Strunk said, reflecting on her time spent in the hospital with Baylor. “It is mind blowing all the knowledge— it’s amazing.”

Strunk said that the nurses have become lifelong friends and the Ronald McDonald House has been a true blessing to their family.

In the beginning doctors wouldn’t give the Strunks much hope to go on, but once the hole in his heart was plugged things looked up and nurses even started to remark how well Baylor was doing with the exception of (ROP) retinopathy of prematurity. For that the doctors gave him injections and laser surgery. Follow-up care will be routine as well a cardio checkups and a visits with ophthalmology.

Strunk said the road has been long and humbling but everything is good and the family is thankful to all be together again.

As far a long-term issues for Baylor, the Strunks and the doctors will take things one day at a time.

“We are Christians and our faith in God has been what has pulled us through this journey,” said Strunk. “People say I don’t know how you do it but God has given us the strength and the tunnel vision. You do what you have to do.”

The Strunks have many people to thank for making their load a little lighter over the past five months including their church, their employers (Hunter Hills for Misti and the United States Penitentiary in McCreary County for Shane), the community and their friends and family.

“It speaks volumes to know that both of us have been off work for five months and we’ve not worried about a house payment,” she said, adding that one day her husband looked at her and said there are some really good people in this world. “Experiences like this are truly humbling.”