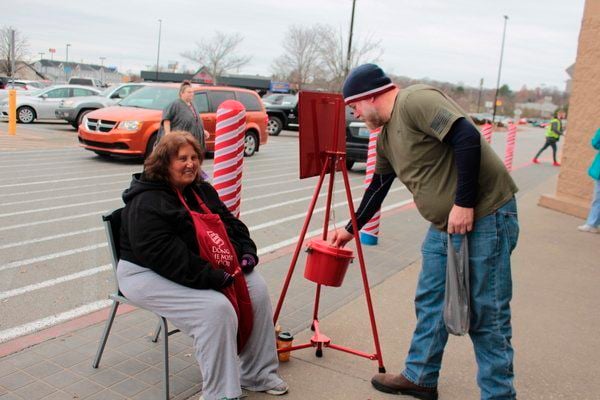 Willie Smith drops some money into the Salvation Army's red bucket while bell ringer Joanna Duncan looks on. This is Duncan's 21st consecutive year volunteering as a bell ringer, all of which have been at the London Walmart store. 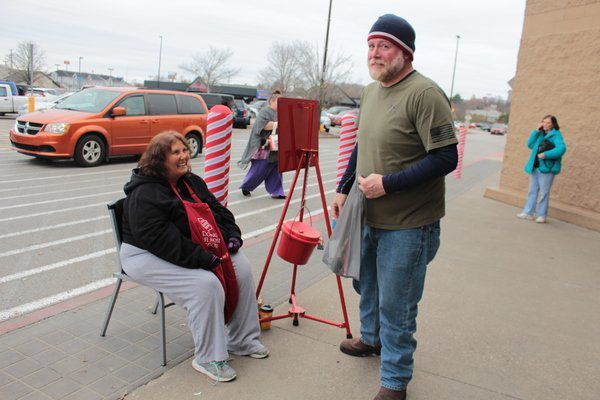 Joanna Duncan, left, tells Willie Smith "thank you" after he dropped a donation into the Salvation Army's red bucket on Friday. Duncan has been the bell ringer at the London Walmart for 21 consecutive years.

Willie Smith drops some money into the Salvation Army's red bucket while bell ringer Joanna Duncan looks on. This is Duncan's 21st consecutive year volunteering as a bell ringer, all of which have been at the London Walmart store.

Joanna Duncan, left, tells Willie Smith "thank you" after he dropped a donation into the Salvation Army's red bucket on Friday. Duncan has been the bell ringer at the London Walmart for 21 consecutive years.

The consistent "ding ding" of the Salvation Army bell doesn't deter Joanna Duncan, nor does the cold weather that marks the winter season.

Instead, she counts each as a blessing - blessings for which she is grateful.

Duncan has started her 21st year as a bell ringer for the Salvation Army outside the London Walmart store. And it doesn't matter if you stop to drop some change or dollar bills into her bucket, she still flashes her smile and says, "Merry Christmas. God Bless You" or "Have a blessed day."

But Duncan has no hidden agenda in her message - she is sincere and appreciative of every penny she collects and every moment she has to share with others.

Her 21-year span with the Salvation Army stems from her own experiences. She was one of five children who were raised by her grandmother in a time when finances and opportunity were far lesser than in today's world.

"The Salvation Army gave me my first doll," she said. "So when I got older, I wanted to give back."

Duncan does give back indeed - her friendliness and sincerity make the London donation spot one of the best in the area. And after 21 years, she recognizes many of the faces who have stopped by the years prior.

She doesn't have to sit out in the cold, but she wants to spend her time on Earth in a positive and helpful way. Apparently that pays off well for her, as the bucket was brimming with cash by Friday afternoon. She credits part of that to an economy that has picked up over the past few years.

"It's been excellent here today," she said. "People are really giving this year. My bucket is about full."

She likes being in London, although she operates for her volunteer work through the Middlesboro office of the Salvation Army. She hopes to continue as the Walmart bell ringer for many years to come, despite having some health problems this past year. Duncan nearly missed last year's season due to health issues but recovered in time to return to her spot in front of the merchandise side of the London Walmart.

"I've made a lot of friends here," she said. "They've found some more health problems. My head is doing like a baby's - it has a soft spot in it and they don't know what's causing that. But I'm not going to let it get me down. If the good Lord lets me, I'll keep doing this every year."

Despite her pending health issues, Duncan keeps on keeping on with her bell ringing, flashing her smile and greeting everyone who enters and exits the store.

"Merry Christmas," she says to those passing nearby. "Have a blessed day."