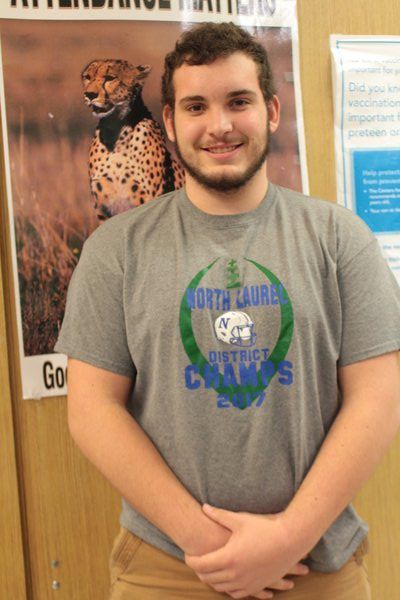 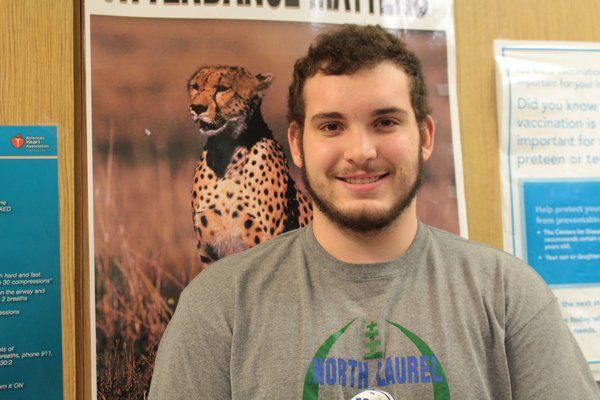 Rather than playing football with his teammates as he had planned, he found a new role in the sidelines after an injury and surgery this year.

Johnson began playing football during his freshman year but was injured his sophomore year and had to undergo surgery for a torn ACL. Although he continued to play on the team after his recovery, he continued to have problems with his knee. In August, he underwent another surgery to correct the problem.

"The ACL was in the wrong place so they had to go back and fix it," he said. "I also had a torn discus."

But rather than just sitting on the sidelines, NLHS football coach Chris Larkey had a special duty that would help Johnson's teammates.

"I ran the camera for the team," he said.

His injury has been the inspiration for his own future - that of becoming a physical therapist.

"My knee injury made me want to help other people with their injuries," he said.

The oldest of three children of John and Tonya Johnson, this senior student appreciates family closeness. While his own injury prevented him from playing football, he stays close to the game through his younger brother who played football at North Laurel Middle School - and was a member of the state championship team this year. Throw in two cousins who play football for their schools and Johnson is never far from the game he loves.

"I played football as a kid and when I got in high school, I wanted to go back to playing," he said. "I got hurt but I still wanted to play. The football team is pretty close knit, like a family."

Even at his young age of 17, Johnson is set in his goals - none of which involves the partying scene.

"There are some people who do drugs and alcohol, but I don't care about that stuff," he said.

What he does care about is his future and the legacy he leaves behind with his classmates and friends.

"I'd like to be remembered as a happy-go-lucky person," he added. "I always try to be positive and see the positive side of life."

He credits Larkey as being one of the biggest influences on his life.

"Coach Larkey has great leadership skills. If you keep making the same mistake, he will ream you out. But he is always ready to help you," he said. "He encourages you to do better."

For this senior student, making the grades and preparing for the future is key to his goals in life. He was enrolled in classes at the Center for Innovation during his sophomore year and is currently taking college algebra, English IV and anatomy during his final year of high school. He said science courses come easy for him, while English presents some challenges.

"English is my hardest subject, especially the writing part," he said. "Anatomy is my favorite class."

But with all the challenges he has faced thus far, Johnson still keeps a positive attitude and keeps focused on his goals. And in the years to come, he hopes that he has achieved all he has aimed for and is remembered fondly by his friends.

"The most important thing is to look at the positive side of life," he said. "And never give up."