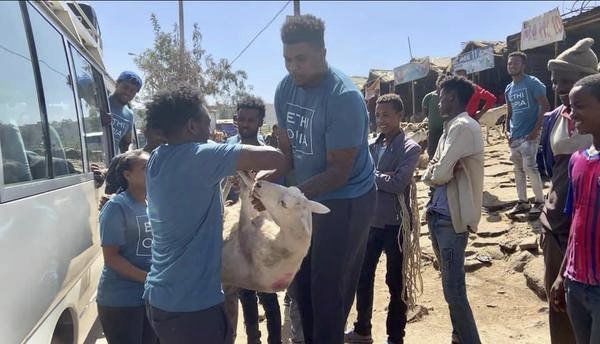 Kentucky defensive lineman Calvin Taylor Jr. said he was "cautious" and not afraid when he had to pick up a goat during his mission trip to Ethiopia. 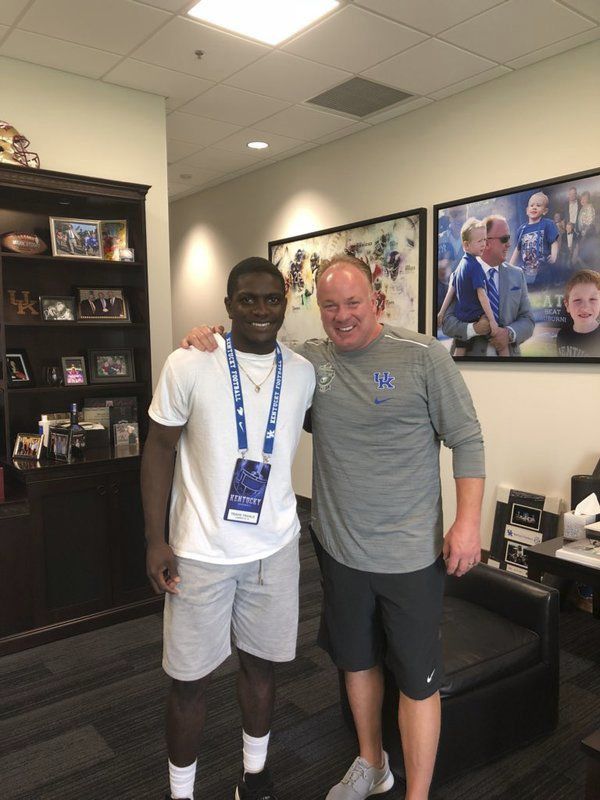 Bowling Green's Vito Tisdale is one of top-ranked safeties in the 2020 recruiting class has a "comfort level" with some recent UK commits which could be a big plus for coach Mark Stoops. 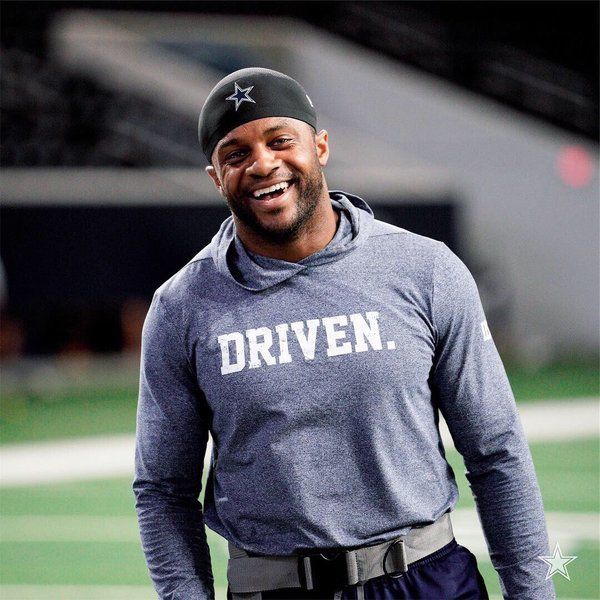 Dallas Cowboys receiver Randall Cobb says UK coach Rich Brooks had a "huge impact" on his life and still does.

Kentucky defensive lineman Calvin Taylor Jr. said he was "cautious" and not afraid when he had to pick up a goat during his mission trip to Ethiopia.

Bowling Green's Vito Tisdale is one of top-ranked safeties in the 2020 recruiting class has a "comfort level" with some recent UK commits which could be a big plus for coach Mark Stoops.

Dallas Cowboys receiver Randall Cobb says UK coach Rich Brooks had a "huge impact" on his life and still does.

Vito Tisdale’s explosiveness is what immediately stands out to high level coaches when they see him play and why he has college scholarship offers from some of the nation’s best programs.

“His explosiveness just jumps out at you,” said Bowling Green coach Mark Spader. “He’s primarily being recruited as a strong safety and that’s where I would envision him playing in college. Tennessee might want him to run the ball but on defense he covers so much ground and arrives very violently.”

Alabama, Oklahoma, Kentucky, Florida State, Georgia, Tennessee, LSU, Texas A&M, Ohio State and Louisville are some of the scholarship offers that the 6-2, 185-pound Tisdale has. He’s ranked as the sixth best safety nationally in the 2020 recruiting class by 247Sports and fourth by Rivals.com.

“An ankle injury screwed him up the last third of the season,” Spader said.

Tisdale will move to safety for his senior season with the coach’s son, a two-year starter at strong safety, moving over to offense.

“I am excited to get Vito back over on defense, but he will get to do a lot of different things. He will touch the ball on punt return, kick return. We will still have some packages (on offense) for him because he’s too good not to use,” Spader said. “We want to make sure he always has a taste of the ball.”

Spader expects Tisdale to make his college choice before the season begins with significant impact from his father, a former triple option fullback at Bowling Green.

“I think they have an idea now about their top schools,” Spader said. “I think Vito likes part of recruiting. He understands how important this decision will be for him. He’s made a number of visits and seemed pleased but he’s holding his cards close to him. He’s not released any kind of list of top schools yet. I think his big fear is that he does not want to mess this up.”

Spader said Kentucky coach Mark Stoops and recruiting coordinator Vince Marrow have done an “outstanding” job recruiting his star but so have several other schools.

“Alabama is right in there with UK just as hot and heavy,” Spader said. “Texas A&M has been in here a lot and talks to him a lot. Coach (Lincoln) Riley from Oklahoma and him have developed an odd relationship. He went to a 7 on 7 event there with a team out of Tennessee and they hit it off. A number of others schools are hot on him, too. Louisville with its new staff has tried to jump in late and has shown they really want him. Western Kentucky would love to have him and understands the magnitude of the offers he has but has made it clear they would love to have him.”

Spader said Tisdale gets a lot of mail and contact from coaches as he’s trying to set a summer schedule. He’s already visited Alabama and Kentucky. The coach thinks if Texas A&M is “heavy on his list” that he should visit there.

“He needs to meet potential teammates and see his comfort level with them. I have impressed that on him,” Spader said.

The Bowling Green coach admits he doesn’t follow social media closely but knows some recent Kentucky commits have reached out to Tisdale.

“Some of the guys that have committed there he has a comfort level with and is happy they made their decisions,” Spader said. “He doesn’t say a lot. He loves playing but he does not like to be the center of attention and doesn’t relish doing interviews.”

Tisdale had an “outstanding” academic year as a junior to make sure he was ready academically for college.

“He did not have a great year academically as a freshman but he has battled back,” Spader said. “He will be a qualifier (academically). He has confidence academically now in what he can do.”

Growing up in Paintsville, Kash Daniel was a three-sport standout and now has become a starting linebacker at Kentucky. However, he’s never lost his love for fishing.

“I have fished as long as I can remember. I hunt when I can, but fishing is always on my mind. I love fishing and that’s always been my thing,” Daniel said.

Daniel says there are a lot of things he cannot control in football or life. Fishing helps compensate for that.

“When I am not fishing I am this guy so full of energy and enthusiasm. That’s just how I go about things,” Daniel said. “Fishing for me is that counter balance. No cell service. It’s just the boat, the fishing rod and the birds chirping.

“Fishing can be stressful. It can be very competitive. I started fishing when I was just a little guy and have done tournament fishing since I was about 7 or 8.”

Daniel even grew up watching professional fishermen on television and even thought about him one day being a pro angler.

Randall Cobb viewed himself as a quarterback coming to college after his outstanding prep career in Alcoa, Tenn., and did start four games at quarterback his freshman season at UK for coach Rich Brooks. His sophomore year he played mainly receiver but also returned punts and kicks and held for field goals and extra points.

His junior season, Joker Phillips became the new head coach after Brooks retired. Cobb became the first UK player to have a rushing, passing and receiving touchdown in a game since Shane Boyd in 2003 and also tied the school record for career touchdowns with 32.

“Because of my pride, I wanted to be a quarterback and made that known,” Cobb said. “The coaching staff helped me see that I could have a longer NFL career at receiver. I eventually believed them and it has worked out like they said.”

It has worked out so well that Cobb played eight years for the Green Bay Packers and had 470 catches in 105 NFL games for 5,524 yards — an average of 11.8 yards per catch — and 75 touchdowns. After missing seven games with injuries last season, the Packers did not re-sign him and he landed a one-year, $5-million contract with Dallas.

Cobb knows he still has Brooks to thank for “only” making $5 million this year.

“Coach Brooks had a huge impact on my life. I would probably not be where I am at if not for him,” Cobb said. “He shot me straight and told you how things were going to be. I valued his opinion a lot as an 18 and 19 year old kid, and still do.

“I am thankful for having him in my life. We still talk. He came up to a game two years ago and him and his wife came to dinner after the game. He was at my wedding back in 2017.”

I am not sure how many people really thought DeMarcus Cousins could play a significant role with Golden State this season. He had torn his Achilles in late January of 2018 while playing for New Orleans and was just starting to play again when he tore his quad in mid-April in the second game of the playoffs.

Yet he was in the starting lineup in the Finals — he had a double-double in his first start — and says he never worried about what might happen.

He doesn’t feel sorry for himself over working so hard to come back from his Achilles injury and then going down with a quad injury not long after he finally got back to playing again.

“I would be lying to say when it happened I wasn't thinking to myself, why me or why now or whatever the case may be, but I'm a firm believer in everything happens for a reason. God's got a plan for me. So I got to be patient and my turn will come around. So just got to be patient.

“I don't take any of this for granted. I've seen how quick this game can be taken away from you. So every chance I get to go out there and play, I'm going to leave it on the floor.”

Kentucky football players Landon Young, Boogie Watson and Calvin Taylor Jr. said their May mission trip to Ethiopia left a lasting impression on them because of the work they did to try and help children there.

However, the players also got to experience a few other new things, too.

They went to a resort with the Ethiopian children that had a lake and zoo and were given a chance to ride a camel right after the players, children and camels all had lunch.

“There’s not 300-pounders in Ethiopia, and that camel had never seen what was coming at him,” the 324-pound Young said.

Watson had a little different perception.

“It was foaming at the mouth,” Watson added.

Young’s camel didn’t rush to give him a ride after finishing lunch.“It still wasn’t done when I had to ride it after lunch, so it was hurting. It was very sore. You can ask (Boogie and Calvin), it tried to get up with me a couple of times before it finally did it. It was growling,” Young said.

Taylor had his own memorable experience trying to hold a goat and hoist it up to Young and Watson for transport.