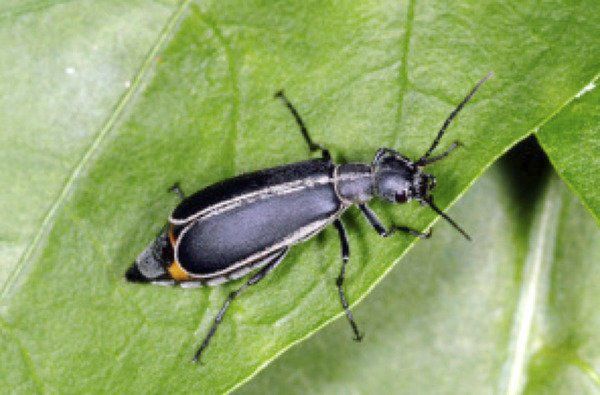 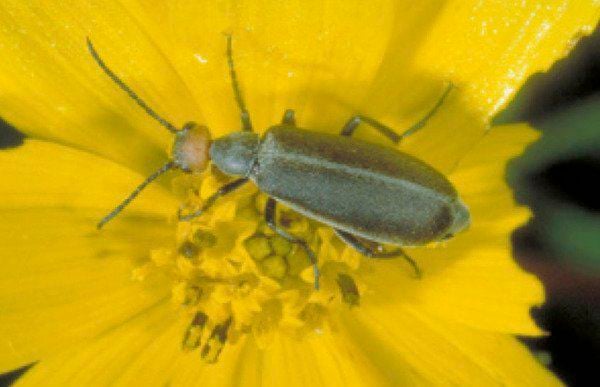 Several species of blister beetles are common in Kentucky; they can be a problem to livestock when they infest alfalfa hay. As few as 5 to 10 of these beetles can be fatal to horses when ingested because of the cantharidin in their hemolymph (insect blood). Canthridin is a bitter chemical that is toxic to several organ systems in livestock, particularly the digestive system. Cantharidin is a stable toxin that remains in the dead beetles that were crushed during the harvest of alfalfa. While horses are very susceptible, other livestock consuming blister beetles may become sick or die.

Blister beetles have an interesting life cycle that begins as eggs laid in crevices of soil in late summer. The eggs hatch in fall and the active larvae search for clusters of grasshopper eggs to consume. The adults emerge from the ground the following year in late spring. The adults feed on the leaves and blooms of alfalfa; they can also be pests of tomatoes, peppers, and melons where they also feed on foliage and flowers. With alfalfa, the adults usually emerge after first cutting.

Blister beetle contamination of hay is often due to beetles being crushed during harvest. Beetles crushed by crimper rollers become incorporated into the bales. However, if beetles escape being crushed at cutting, most will leave the field as the hay cures. As blister beetles tend to be found in small clusters in the field, often only a small number of bales are contaminated.

Avoid using crimpers during cutting to reduce blister beetle contamination of alfalfa hay. Also avoid driving over freshly cut alfalfa as this can also crush beetles in the cut hay.

It is best to scout field prior to cutting hay during periods when blister beetles are active. Often, only portions of the field need to be sprayed. Pay particular attention to field margins as blister beetles often do not move far into fields. Short-residual insecticides before cutting are used to reduce blister beetle levels. Go to laurel.ca.uky.edu to find the publication Insecticide Recommendations for Alfalfa, Clover, and Pastures – 2020 (ENT-17) for a list of recommended insecticides.