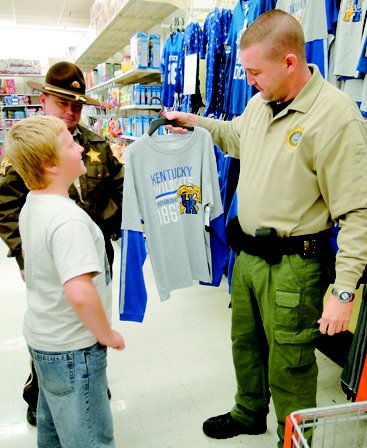 Shop with a Cop participant Travis Mullins, 9, checks out UK shirts and jackets with Ky. Constable Tim May and Park Ranger Russell White. Mullins says he is a big UK fan. 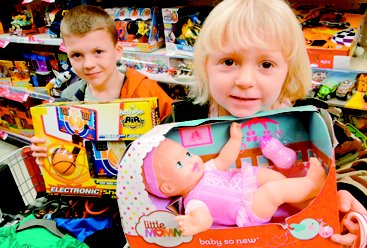 Siblings Daniel, 9, and Peggy Burd, 5, show off their new toys. 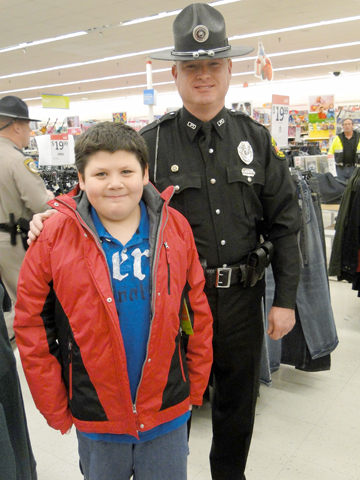 Jacob Carpenter, 11, finds a new coat with the help of London Police Patrolman Richard Reynolds during the 17th annual Shop with a Cop Saturday.

Shop with a Cop participant Travis Mullins, 9, checks out UK shirts and jackets with Ky. Constable Tim May and Park Ranger Russell White. Mullins says he is a big UK fan.

Siblings Daniel, 9, and Peggy Burd, 5, show off their new toys.

Jacob Carpenter, 11, finds a new coat with the help of London Police Patrolman Richard Reynolds during the 17th annual Shop with a Cop Saturday.

Before sunrise, Barbara Rudder walked with her great-granddaughter, Brianna Isaacs, 5, into Kmart. Isaacs was one of the 250 children selected to participate in this year's Shop with a Cop program.

"It think it's a wonderful thing," Rudder said, as Isaacs eyes peered up at her, eagerly awaiting the day.

For many parents and grandparents, this day is not only special for the children.  It takes a heavy burden off them trying to juggle already tight finances and having to put presents under the tree.

"Nowadays, it's so hard," said Pam Proffitt, mother of two.

Tiffany Schubert was relieved to know her three boys got the toys they wanted for Christmas.

"It meant a lot.  We appreciate it," she said.  "They love video games and we can't afford it."

Shop with a Cop is a joint effort between the Fraternal Order of Police and area law enforcement agencies.  Members of the London Police Department, Laurel County Sheriff's Office, Kentucky State Police, a park ranger and a constable all participated in Saturday's event.

The program started with only 10 children. In 17 years, Laurel County Shop with a Cop has served more than 3,500 children.

"For the families that are involved with Shop with a Cop, it gives them a joy and Christmas brightness," KSP Sgt. Greg Reams said. "This is for them."

Reams started with Shop with a Cop in 1996 when he was a member of the Laurel County Sheriff's Office.

Each child is allotted $100 on the shopping day with $75 going towards clothes and $25 toward a toy or toys.

Children have an opportunity to interact with law enforcement in ways they may not otherwise.

"For some kids, a lot of the dealings with law enforcement come out of negative situations," he continued.  "This was started to build positive relationships, let them know they don't have to be scared to talk to an officer.  We think we have made some great strides in that area."

It was the fourth year at Shop with a Cop for KSP-Commercial Vehicle Enforcement Public Affairs Officer Steven Douglas.

"Seeing the look on the kids' faces just really touches my heart personally," he said.

And he's not alone.  London Police Patrolman Eric Stallard said the day is rewarding for both the child and the officer.

"We see kids all over the county who are underprivileged," he said.  "Getting to put a smile on their faces, it puts a smile on your face."

This year was the biggest Shop with a Cop KSP-CVE Inspector Chris McQueen has ever seen. He has been a part of Shop with a Cop for 10 years through both the Kentucky State Police and the Fraternal Order of Police.

"This makes our Christmas special too," he said.

So many of the parents just wanted to say thank you to local officers.

"They've had a rough year," said parent Amy Bell of her four children.  "They lost both their grandparents. So they can enjoy this time, enjoy it with family.  It makes the season to know that people care enough to do this for not just mine, but all of them (children)."

"After what happened last week (in Connecticut), we're just happy to be here with these kids," Sgt. Edwards said.  "There's some real need in this community. This is something we can do to help just a little."

Edwards praised Kmart and their staff for continuing to open their doors to the program.  He also thanked Flav-O-Rich for donating milk and Flowers Bakery for donating honey buns for the children's breakfast.