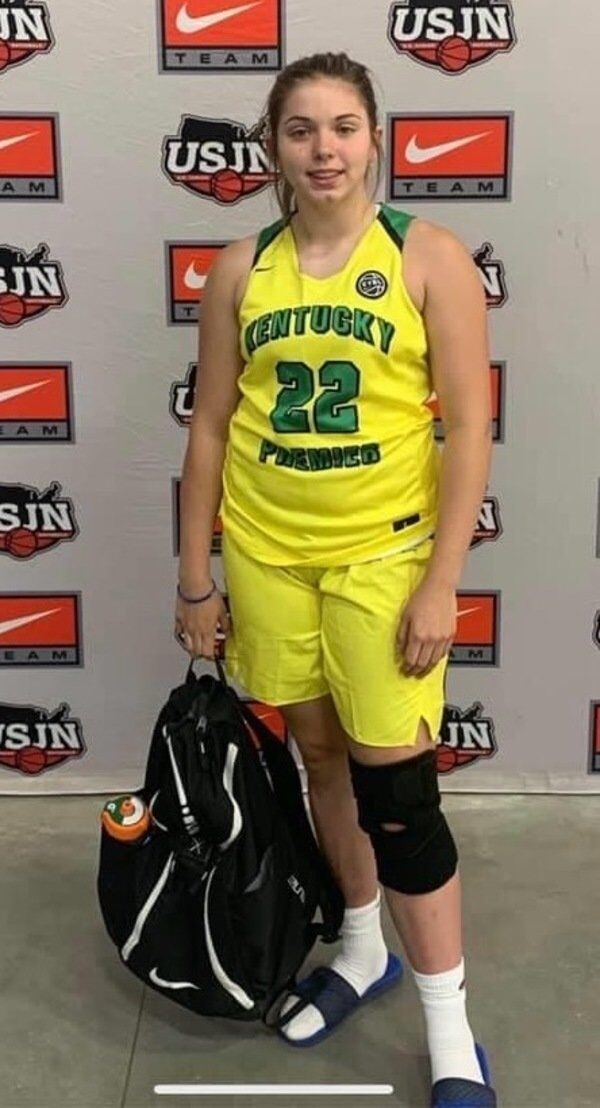 Halle Collins has played for the Kentucky Premier 16U EYBL team this summer. She has played a big role in their success. | Photo Submitted 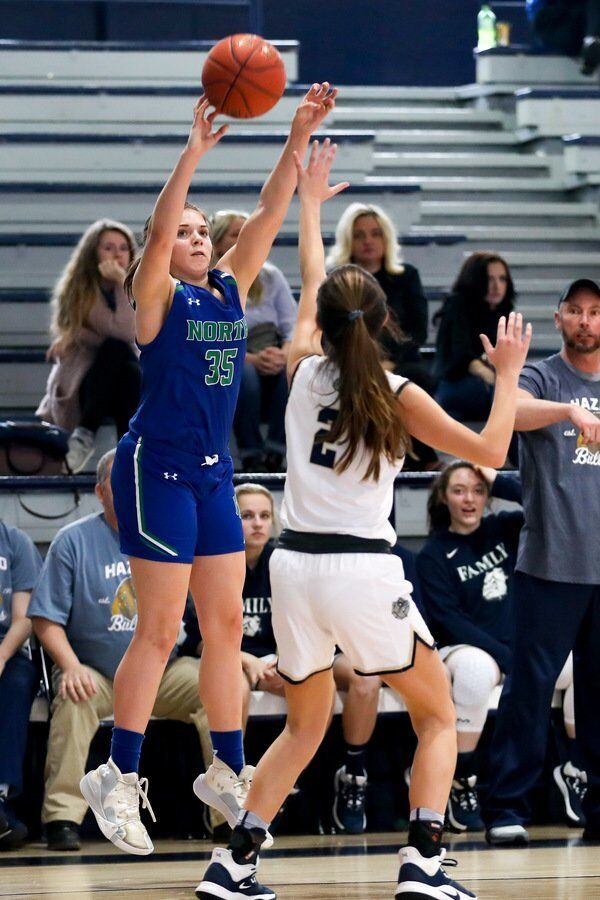 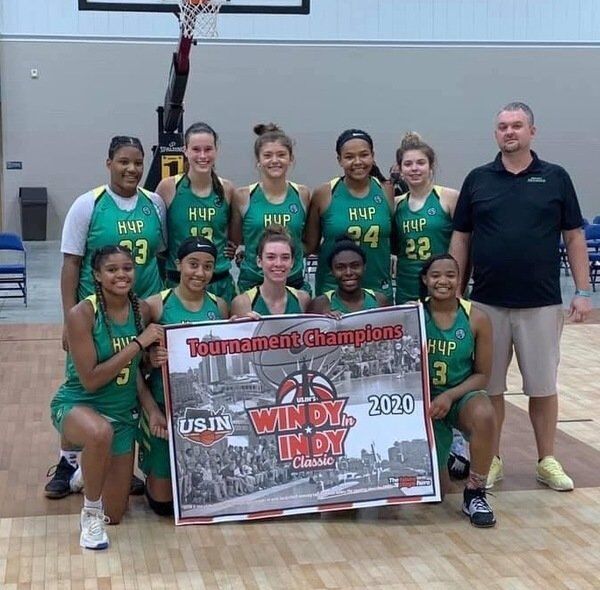 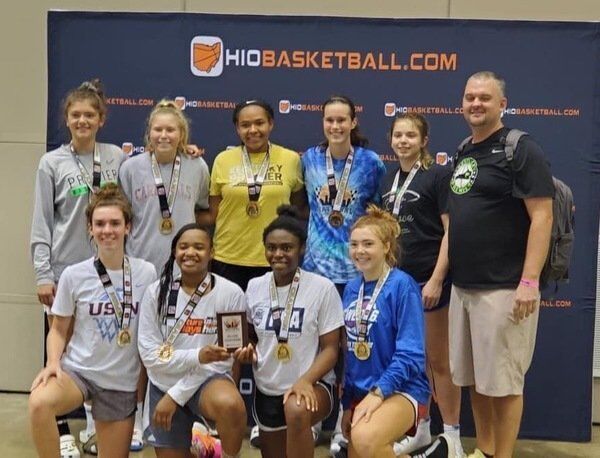 Halle Collins has played for the Kentucky Premier 16U EYBL team this summer. She has played a big role in their success. | Photo Submitted

LONDON — It’s been quite an interesting past four months for North Laurel’s soon-to-be eighth-grader Halle Collins.

After leading North Laurel’s varsity girls basketball team in rebounding (6.8 points per game) and placing second in points scored (14.4) while also playing a big role in the Lady Jaguars‘ run to another 49th District championship along with an appearance in the 13th Region title game as a seventh-grader, Collins was looking forward to continuing to improve her game at the AAU level with her Kentucky Premier 16U EYBL teammates.

But the COVID-19 pandemic put a stop to any basketball being played for a few months before seeing Collins finally reach the ballcourts again in early July.

“The layoff I had lasted forever,” Collins said. “It was very boring, but I kept and kept working out and trying to get better. I would go outside and workout, go and run two to five miles, or use the trainer that Kentucky Premier had sent me. The trainer helped me a lot.

Once July rolled around and Collins found out she’d be traveling to Indianapolis to participate in a tournament, she was more than ready to get things going on the basketball court

“I was so excited to be able to play with new people and the EYBL circuit,” she said. “EYBL is a different world. The girls you are playing against make you so much better. I couldn’t have done it without Coach Tapley and Coach Cann. My teammates are also great to Play with. EYBL is a new chapter and I’m very blessed to be apart of it.

“We have played in four tournaments and about to be five,” Collins added. “It felt great knowing I was 14 playing a few grades ahead. Knowing I worked my butt off to somewhere most kids don’t get to go. It is a great accomplishment to be where I am today.”

Collins continued her success on the ball courts last week by helping Kentucky Premier to a National Championship in Indianapolis.

“It felt great knowing that I helped and captured a national championship with my team,” she said. “My team and I worked very well together since we have only had a few tournaments and have only had two practices. We are just unbelievably good and it’s also unbelievable to be playing at that level.”

But with the success this past season at both the middle school, high school and AAU level, comes the pressure — something Collins has handled well as a 14-year old.

“There is more pressure than anyone would want to handle, to be honest,” she said. “There is always a target on my back, so I always have to get better and better to show people how good I am.

“When people expect a lot out of you there is a lot of pressure because you want to give them what they expect and if you don’t you feel awful,” Collins added. “Having my family and coaches believe in me, even on rough days, is how I handle the added stress. Bring the best in me is all I’m worried about.”

Her success on the courts has also caught the eye of numerous colleges.

“The schools that have contacted me are Louisville, UT Chattanooga, Northern Kentucky University, Eastern Kentucky University, and the University of the Cumberlands,” Collins said. “I had a visit to Louisville before the virus which was so much fun and went very well. Going on to the next level which would be college is also one of my dreams. I would love to go to a DI college and pursue my dreams. Then go overseas and play for a team.”

Collins said she will continue to work hard to improve once the AAU season Is over to gear up for the upcoming middle school and varsity seasons.

“I am going to get in shape and try to lose a few pounds before I do anything else. But after that I am going to try to get stronger, quicker, handle the ball better, and drive better,” she said. I will also try to tone up more and look bigger.

“I am super-excited (about the upcoming seasons),” Collins added. “I have talked and talked about to people of just how excited I am to start back with my family I would say. In middle school, we won’t have a big of a season because of the virus but it still will be just as good in my opinion. We are going to get the 3-peat this year no question about it. In high school, I’m super, super, super excited because we have revenge (on our minds). We have teams and places we need to be. Our team is going to be unstoppable for a long time. We have a pretty young and talented team, so we will be expecting a lot out of us in the next few seasons. I would love to win district, region, and state. It wouldn’t surprise nobody if we got all three. It makes me wanna go play right now.”

Collins also mentioned she has a lot of goals she would like to accomplish before she graduates. She has already been named the 13th Region Media Girls Newcomer of the Year and the Trispy’s Breakthrough Player of the Year.

“I would love to win a state title, win region the next five years and district, get Miss Kentucky basketball my senior year, get MVP at region every year, and win the Trispy’s Player of the Year the next five years,” she said. “I would love to accomplish these and get the leading scorer and leading rebounder at North laurel. A big accomplishment is being a straight-A student through high school.

“Also, never let people get in your head,” she Collins added. “Don’t let people tell you what you can and can’t do. People will always try to bring you down and put you at your worst, but that’s when you prove them wrong.”