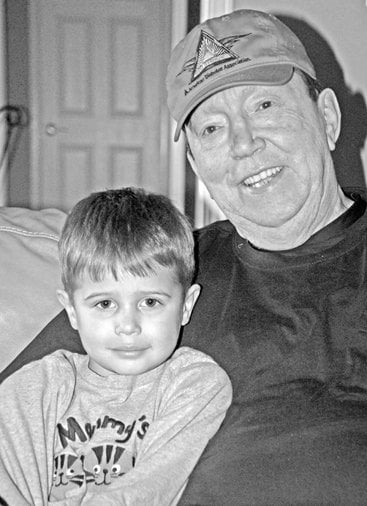 Long-time, regular readers of this column already know that I, along with son Christopher and 5-year-old grandson Tyler Kane Ochs (TKO) are diabetics. I’m Type 2, which means I get by with oral medication, paying close attention to what I eat and as much physical exercise as I can muster.  Both Chris and TKO are insulin dependent but Tyler gets the short end of that stick. Chris usually only has to do blood tests and injections twice a day.

TKO has an insulin pump that has to be taken out and reinserted every two or three days, but he has to have a minimum of 6 blood tests daily and count every carbohydrate he ingests so that he can regulate his insulin intake. He has had the disease since just before his third birthday but already he can pretty well manage it with minimal assistance.  Tyler can administer his own blood tests and count carbs with the best of ‘em.  I’ve never once heard him complain or expect special treatment because he’s diabetic.

Regular readers also know that Tyler’s parents, Kevin and our daughter, Jennifer Ochs, his big brother Braden, his grandparents and a host of other relatives and close friends are very active in The American Diabetes Association, most particularly in that organization’s  annual “Step Out Walk to Stop Diabetes.”

You also know that, about this time every year, I call on Points East readers to help sponsor Team TKO’s participation in that event, scheduled, this year, for May 31, 2014 at Keeneland.

Sometime I think that Tyler ought to be the poster boy for juvenile diabetes.  He is as active and onery as most other 5-year-olds and if you saw him in his tee-ball, baseball uniform, up to bat, or running the base paths, you would never guess that he has an insulin pump taped to his belly and a needle poked into his abdomen.  But you would see grandpa, both his grandmas and his mom cringe every time he slides into home plate or any other base, for that matter.

He even swims while wearing the device that essentially serves as a prosthetic pancreas.  Early on, Tyler’s Mom and I discussed limiting our fundraising to a cause specifically focused on Type 1, juvenile diabetes because it is so traumatic to both the children who suffer from it and for their families.  Treating it is incredibly expensive for parents without any or with woefully inadequate health insurance.

That’s where our hearts really go out.  Wouldn’t it be wonderful to have a fund that would assure that very young kids with diabetes and their parents had easily- affordable, adequate care and treatment of the disease without having to worry about losing the house?   Without crying all night and worrying what on earth they can do to save their kid’s life, or at least make it more bearable?

The truth of the matter is that it would take several billion dollars a year to really address that need.  We believe that our best use of effort and cash is to help find a cure and ways to prevent the disease from even happening. We also believe the American Diabetes Association (ADA) to be the organization best suited to spearhead the cutting edge research and development that may ultimately lead to those solutions.  And we know that everybody working at ADA would love nothing better than to work themselves out of a job.

Kids like Tyler, most of whom have to have 6 or 8 blood tests followed by as many insulin injections every day of their lives, will one day be adults.  Diabetes does not go away nor does the absolute necessity for insulin.

I suspect that many, if not most of you readers,  know adults who have had legs or arms amputated because of diabetes complications.  The disease also leads to often-fatal liver and kidney failure and heart disease.  It is a leading cause of strokes.  I’ve had three of those, myself, almost surely brought on by diabetes.  Diabetics are almost four times more likely to suffer a stroke than people who do not have the disease.

Diabetics are nearly four times more likely to have heart disease.  Diabetes is, by far, the leading cause of blindness among adults over 20.

I’ve had people tell me that as long as I manage the disease, it’s not going to kill me.  Oh yeah?

As far as I’m concerned, it has already taken three good shots at trying.  As most of you know, I also have Parkinson’s Disease.  Medical research now shows that Parkinson’s may be closely related to diabetes.

But, thank God, I’m still able to wobble around in such a way that it passes for walking and that’s precisely what Tyler and I, along with a host of our friends and family members, and a thousand or so other folks intend to do early in the morning of May 31 at Keeneland.

Last year Team TKO raised more than $3,200 to help fight diabetes and just over half of those sponsorship dollars were donated by dozens of readers of this column.   I am so beyond proud of you folks.

The easiest and most convenient way to donate is online. Simply go to www.stepout.diabetes.org and click  DONATE at the top of the page.  You will then be asked to support a participant or a team. Click on one or the other.  Then type in either my name or Team TKO and follow your nose.

Online donations will show up on the website automatically.  If, like me, you wish to make a paper donation (cash or personal check) it may not be counted until after we turn it in on Saturday May 31, the day of the event.  However I will be entering donations to our team as I receive in the mail so you may be able to go to the step out site and check to see how well we’re doing.

Make checks payable to American Diabetes Association and enter Team TKO on the memo line.  Mail your donation directly to me.  Tyler and I will do the paper work, turn the money into ADA and make sure you get a receipt and a thank you note along with a photo of my champ.   Any amount will be greatly appreciated. We are as interested in the numbers of people who support us as we are in dollar amounts.