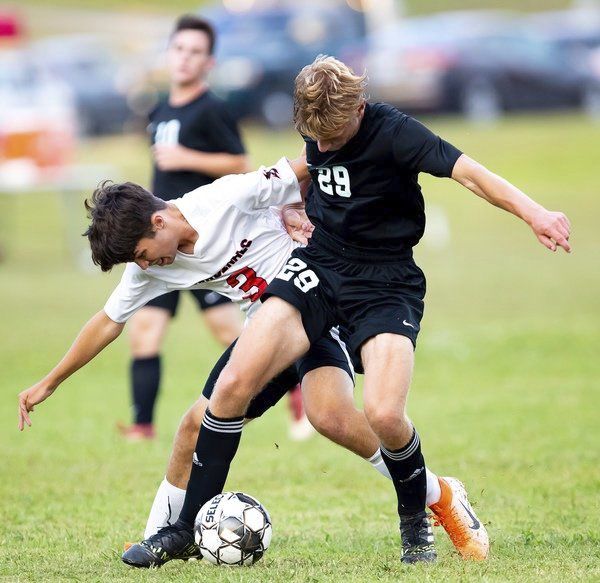 South Laurel's Ben House and a Whitley County player (name not identified on KHSAA roster) fight for possession of the ball. 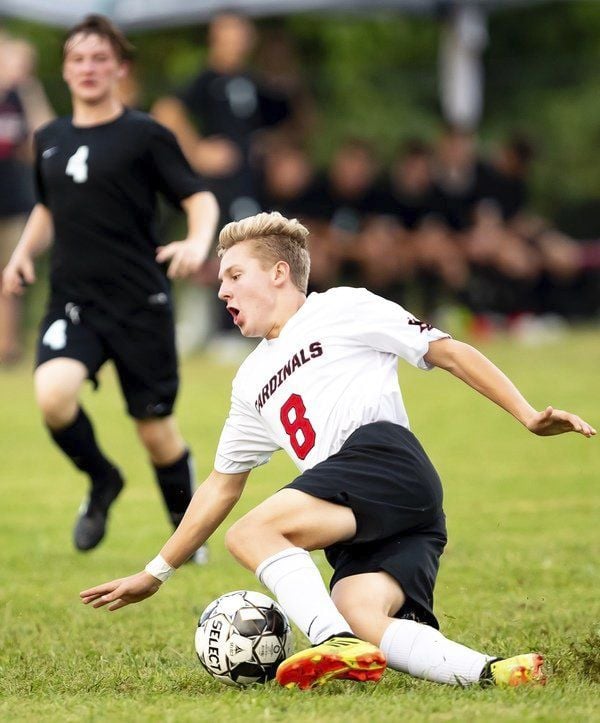 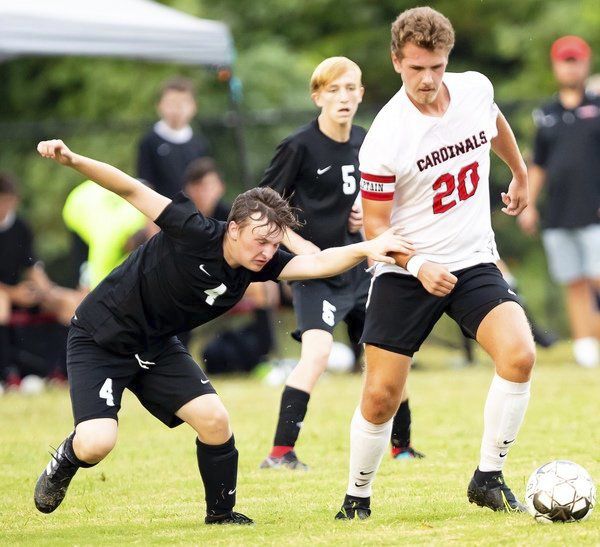 South Laurel's Ben House and a Whitley County player (name not identified on KHSAA roster) fight for possession of the ball.

LONDON — Joey Marcum’s South Laurel Cardinals improved to 7-4-1 after picking up wins on Saturday and Thursday this past week.

The Cardinals cruised to an easy 6-0 victory during Saturday’s road win over Letcher Central while knocking off district for Whitley County on Thursday, 4-1.

South Laurel will be back in action on the road again today against 49th District foe Oneida Baptist.

Zach Smart recorded his second hat trick of the season while Clayton Stacy, Seth Marcum, and Ben House each scored in the win.

“Letcher Central had a strong defense and great goalkeeper. It took us 10 minutes of hard pressure to find the back of the net,” Marcum said.

Smart scored the Cardinals’ first goal (assist by House) and added another goal thanks to an assist from Will McCowan 15 seconds later.

House added South Laurel’s third goal during the 27th minute after cleaning up a Clayton Stacy shot which was deflected off the defensive wall during a free-kick.

Stacy followed with a penalty kick which increased the Cardinals’ fourth goal while Seth Marcum followed a shot out of the corner from Clayton Stacy. The keeper bobbled the ball and Marcum was able to pull it away and get the shot to give his team a 5-0 edge at halftime.

Smart found the back of the net thanks to an assist by Stacy to finish the Cardinals’ scoring for the game.

“I felt like my team played well. They used the big, turf field well to possess the ball and build up attacks very methodically,” Marcum said. “It was a match where we were able to use our bench, and get a lot of players some valuable minutes.

“We face another tough, district opponent, OBI, Monday night at Oneida,” he added. “We were able to use the early lead to our advantage and concentrate in the second half on possession and moving the ball methodically. Letcher Central has a beautiful facility and were great hosts. They were very good sportsmen.”

Ben House, Zach Smart and Clayton Stacy each scored in the first half to give the Cardinals a commanding 3-0 lead while Cody Crawford scored the Colonels’ lone goal in the second half as South Laurel beat Whitley County, 4-1.

“It was a very exciting match. I felt like my team started strong, stayed disciplined and controlled the tempo most of the match,” South Laurel coach Joey Marcum said. “We were up 2-0 when we had a lightning delay. We came back out and picked up another goal before half from a penalty called in the box. Then during the second half, they came out really hard and fast and we were called for a hard foul in the box and they scored on a PK.

“I’m really proud of Tucker Little, our goalkeeper. He blocked a PK, they got a rebound shot and he deflected that one as well,” he added. “We picked up one more when Quinn Rison scored on a cross from Will McCowan.”

Despite seeing his team control the match throughout, Marcum said he was impressed with Whitley County’s play.

“They have made some significant changes since we scrimmaged them in the preseason,” he said. “They have speed, strength and play with a lot of heart. I was pleased with my defense and midfield tonight. Isaac Schneider, Quinn Rison, and Ben House really moved the ball well tonight and kept control of the middle of the field.

“We did a much better job staying connected and attacking as a team,” he added. “We were patient and didn’t try to force the ball. We let the match build and then made better decisions about shooting the ball. We still need to work on finishing shots as I felt like we missed some good scoring opportunities.”