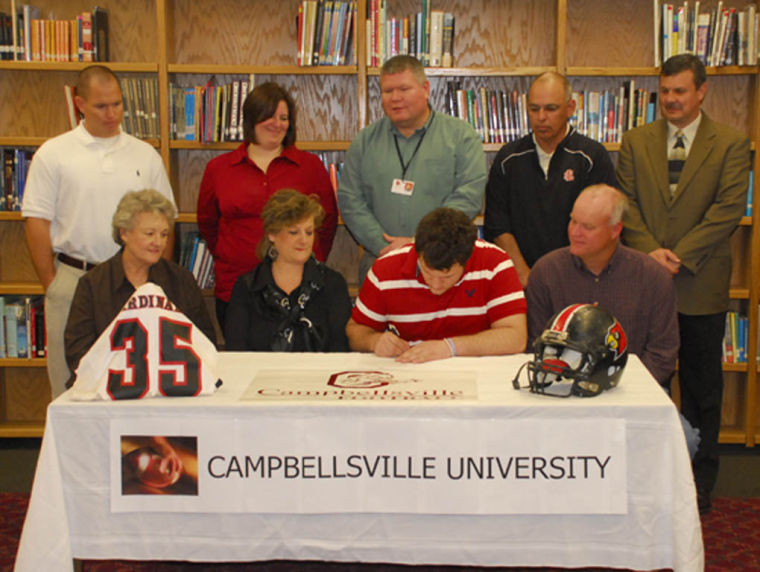 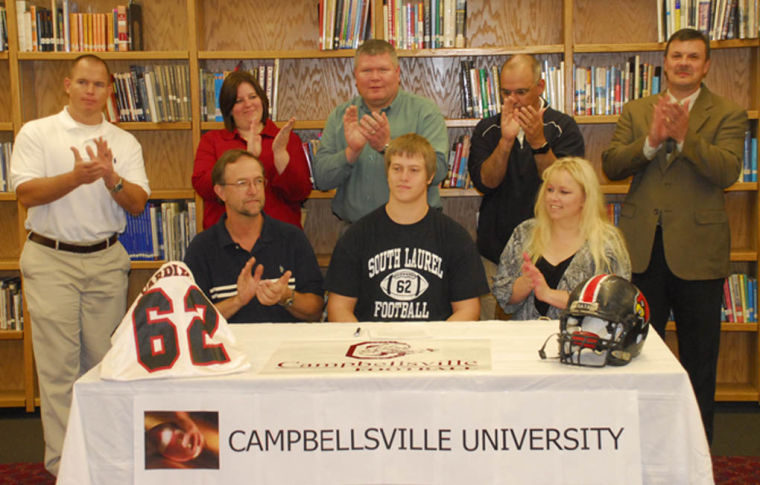 It appeared South Laurel High School was having a two for one special as Jeremy Armfield and Blake Fields signed to play football for Campbellsville University in front of a room full of their peers on Wednesday afternoon. Both players felt comfortable with their decision to play for the Tigers and they look forward to starting their college careers together. “It’s a big dream come true,” Armfield said. “Since the fifth grade I have wanted to play college football.” Fields agreed and talked about how it felt to be in the low percentage of high school players who make it to the next level. “It feels real good,” Fields said. “To be in the 10 percent who actually make it to the college level is awesome.” Both players understand making the transition to the college level will be tough, but they welcome the challenge. “It’s going to be a challenge,” Armfield said. “But I plan to work hard and earn a starting position.” Fields talked about the difference in the game and his confidence in making the adjustment. “It will be a little bit of a transition because the strength and the speed of the game,” Fields said. “But I think I will adjust.” Armfield had several schools to choose from, but admitted staying close to home was a priority. “It was important to stay close to home,” Armfield said. “I’ve worked since I was 16 to help my family out and I didn’t want to leave them.” Once again Fields agreed with Armfield. “I really wanted to stay close to home,” Fields said. “I don’t want to forget about my family, they are really close to me.” Going off to college is often a tough transition to make, but Armfield and Fields are happy to have each other to look to and to hang out with. “It’s good to have somebody I know to room with,” Fields said. Armfield agreed. “It will help a lot having Blake there,” Armfield said. “We’ve been close friends since the sixth grade. We’ve always wanted to play in college together and be there to look after each other.” Tim Branstetter can be reached at tbranstetter@sentinel-echo.com.