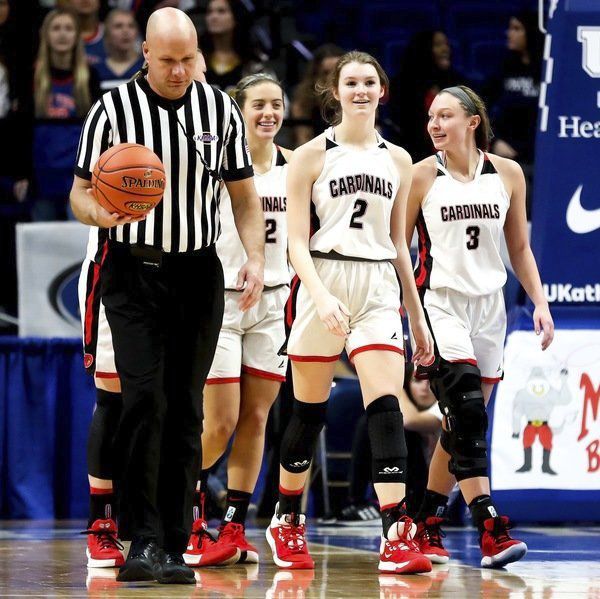 South Laurel's Clara Collins (center) is all smiles after leading the 2020 Lady Cardinals past the 2006 Clay County Lady Tigers during first-round action of the Girls March Madness 13th Region Realignment Tournament. Collins came off the bench and scored 14 points. 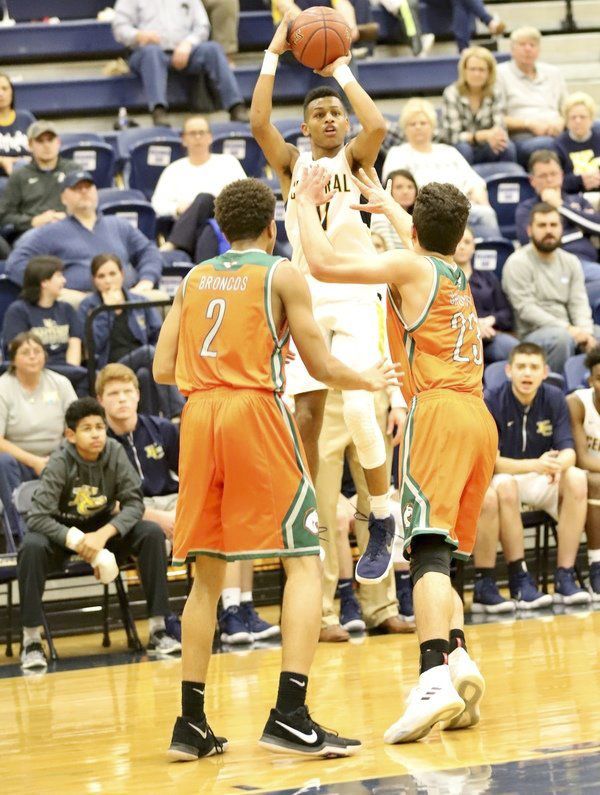 South Laurel's Clara Collins (center) is all smiles after leading the 2020 Lady Cardinals past the 2006 Clay County Lady Tigers during first-round action of the Girls March Madness 13th Region Realignment Tournament. Collins came off the bench and scored 14 points.

The game was a mismatch on paper but North Laurel was able to hang with the Panthers throughout the first half.

Markelle Turner and Nick Martin each paced the way with six points apiece in the first quarter while Jake Allen kept the Jaguars close with eight points and two rebounds.

Knox Central took an 18-12 lead into the second period before seeing consecutive 3-pointers by North Laurel's Ethan Eversole tied the game at 18 apiece.

The trio of Martin, Adams, and Markelle Turner took over midway through the quarter to give The Panthers a 32-21 edge while North Laurel's Allen was sent to the bench after picking his third foul.

The Jaguars rallied once again behind the play of Marcus Carson and Kendrick Henson. Carson's layup combined with two straight 3s by Henson tied the game at 34 apiece at halftime.

Allen's layup to begin the third quarter gave North Laurel a 36-34 edge while the Panthers missed a 3-point attempt in their ensuing possession which led to the Jaguars to get the rebound with 7:19 remaining in the period.

Coach Brad Sizemore pulled his team into a four-corners offensive set and was able to take more than five minutes off the clock before a missed layup by Carson led to a 3-pointer by Zach Patterson to give his team a 37-36 edge.

Knox Central then went into a full-court press which led to consecutive turnovers, allowing The Panthers to close the quarter with a 7-0 run while taking a 41-36 advantage into the fourth quarter.

The brothers' duo of Markelle Turner and Kevionte Turner combined to score the fourth quarter's first 10 points as Knox Central's lead grew to 51-36.

A 3-pointer by Allen combined with a jumper from Eversole cut North Laurel's deficit to 51-41 but the Jaguars couldn't get any closer.

Markelle Turner and Jaylen Adams each recorded dunks during the final four minutes of the game as the Panthers cruised to a 71-53 win.

Allen led North Laurel with 17 points and 12 rebounds while Eversole finished with 11 points.

Deemed a toss-up before tip-off, the 2014 version of the Tigers was a bit older than their 2012 counterpart's which meant experience would pay off in this battle of the two Clay County teams.

The 2012 Tigers built an early 6-2 lead over the 2014 Tigers, but junior Chip McDaniel and transfer Jake Allen were hard to stop the remaining six minutes of the period.

McDaniel scored 11 points while Allen added six points to give the 2014 Tigers a 22-11 lead going into the second quarter.

Smith and Farmer continued their impressive play in the third quarter, combining to score 14 of Clay County's 24 points to push their team's advantage to 65-41 entering fourth-quarter play.

McDaniel added eight points in the fourth quarter while Allen added six to guide the 2014 Tigers to an easy, 85-57 win.

The Lady Cardinals entered the game averaging 72 points while the Lady Tigers were only surrendering 42 points, so something had to give.

Clay County slowed the tempo down in the first quarter and it paid off. South Laurel struggled shooting the ball from the get-go and managed to score only six points as the inside trio of Jackson, Roberts and Phillips combined to score 14 points while Gemma Gray added six points to give the Lady Tigers a surprising 20-6 lead at the end of the first quarter.

Clay County's deliberate style of play carried over into the second period as Jackson took advantage of Rachel Presley's three fouls during the game's first 10 minutes to push the Lady Tigers' advantage to 30-10 with six minutes remaining in the first half.

A 3-pointer by Brianna Howard combined with six straight points by Clara Collins triggered a 16-2 run to close out the first half for the Lady Cardinals. Collett's layup at the buzzer cut South Laurel's deficit to 32-26 at halftime.

Clay County's Jackson scored the third quarter's first four points, pushing her team's lead to 36-26, but Chris Souder's squad answered with a 10-0 run to tie the game at 36 apiece with 2:13 remaining in the period.

Another basket by Clay County's Gray and a putback by Roberts gave the Lady Tigers a 40-36 advantage but two straight 3s by Steele allowed South Laurel to take a 42-40 lead into the fourth quarter.

Presley opened the fourth quarter with a layup and knocked down a 3-pointer at the top of the key to give the Lady Cardinals a 47-40 cushion while Page Jackson followed with a 3-pointer to make the score, 47-43, with five minutes remaining.

The outside shooting of Hall, Steele, and Collett allowed South Laurel to finish the game on a 14-6 run while recording a 61-49 hard-fought win.

Steele led the way for South Laurel with 16 points while Collins came off the bench and scored 14 points. Collett added 13 points while Hall had eight points and Presley finished with seven points. Jackson led all scorers with 24 points and 13 rebounds for Clay County.

An experienced Clay County squad might have entered the game as a slight underdog but that didn't keep them from taking control of the matchup from the opening tip-off.

The inside play of Whitney Belle Jackson and Jordan Phillips gave North Laurel fits from the get-go.

Jackson scored 10 points in the first eight minutes while Phillips added six points to give the Lady Tigers a 21-10 lead at the end of the first quarter.

The Lady Jaguars misfired on their first six 3-point attempts before Gracie Jervis knocked one down from behind the arc with 2:37 remaining in the first half, cutting North Laurel's deficit to 31-17.

Alisha Mitchell added a 3-pointer while Jackson scored four straight points to give Clay County a comfortable, 37-23 advantage at halftime.

Madison Sheppard's layup combined with another Jervis 3-pointer triggered a 10-2 run that saw North Laurel pull to within six points (39-33) with 3:59 left in the third quarter but Clay County's Jackson responded with eight points of her own to give the Lady Tigers a 47-34 advantage with eight minutes remaining.

Clay County finished the game with a 10-2 run, allowing the Lady Tigers to wrap up a 64-49 win over North Laurel.

Clay County's Jackson scored 26 points and pulled down 13 rebounds while Sheppard and Jervis led the Lady Jaguars with 13 points apiece.