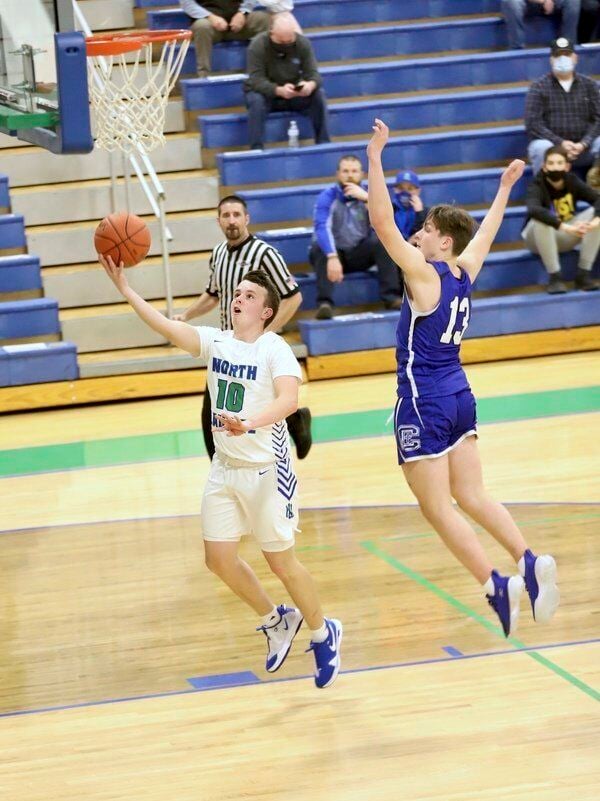 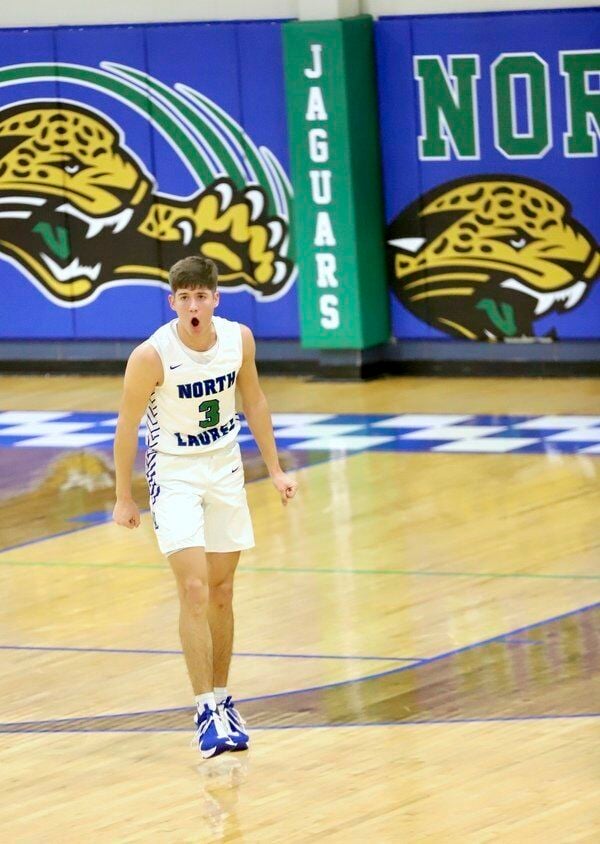 North Laurel's Reed Sheppard celebrated after hitting his third straight 3-pointer to give his team an early double-digit lead against Covington Catholic on Tuesday. | Photo by Les Dixon 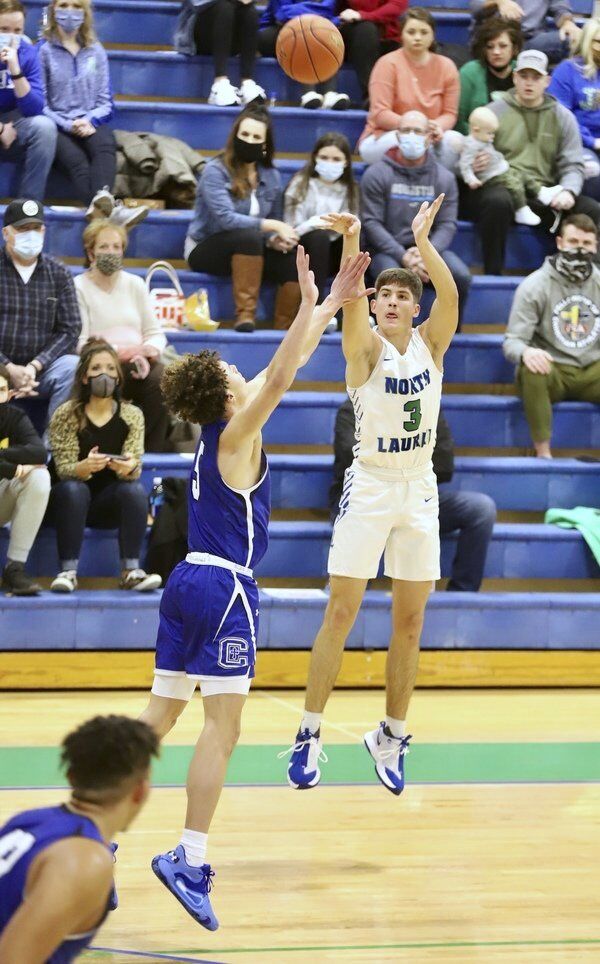 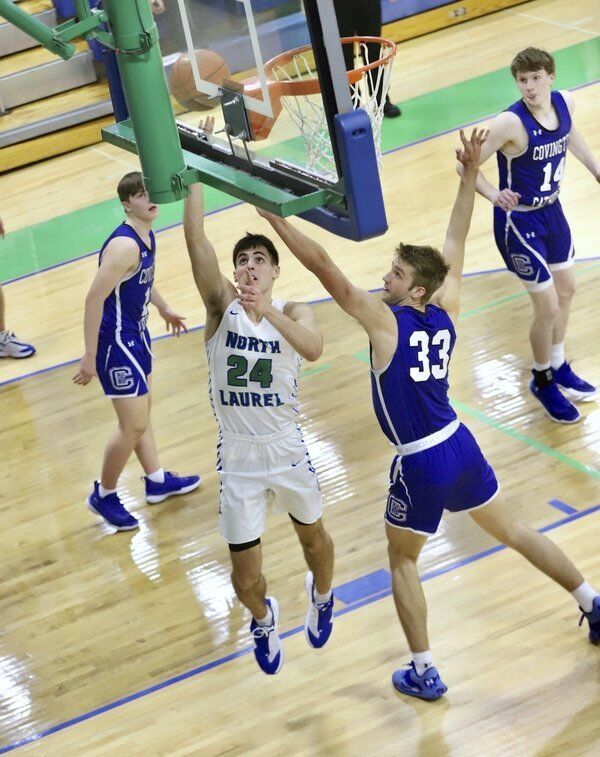 North Laurel's Reed Sheppard celebrated after hitting his third straight 3-pointer to give his team an early double-digit lead against Covington Catholic on Tuesday. | Photo by Les Dixon

LONDON — After seeing his North Laurel Jaguars reel off two wins last week while averaging more than 100 points to begin the season, Nate Valentine wanted to see just how good his team was.

So what did he do this past Sunday?

Valentine scheduled a game against the state’s No. 2 ranked team.

His Jaguars were up to the challenge on Tuesday, outlasting Covington Catholic in overtime by securing an 89-87 win.

The Jaguars were down six points in the extra period of play before rallying and taking the lead for good after Clay Sizemore’s fourth 3-pointer of the game gave North Laurel an 89-87 lead with 13 seconds remaining.

Reed Sheppard led the way with 45 points and 12 rebounds on 16-of-21 shooting while Sizemore added 18 points and Ryan Davidson finished with 16 points.

“I thought we came out and played well our very first two games,” Valentine said. “We shot the ball well and played well defensively but I felt like we needed to find out who we are. It’s still only the third game of the season but this game was so important because it allows us to go and watch the video and figure out what things we need to work on.

“They expose every weakness that you have,” he added. “They’re a big, strong, great team and this was a big win for our program.”

North Laurel led throughout the contest by as many as 14 points (42-28) in the second quarter before seeing CovCath take the lead at 59-58 with 6:24 remaining in the fourth quarter.

But the Jaguars (3-0) never folded even when Davidson fouled out with less than two minutes remaining in regulation while also trailing by six points in overtime.

“I thought we were able to answer the challenge,” Valentin said. “I’m so happy for these guys. This is what happens when you put in a lot of hard work, and they’ve done that.

“No question this was a team win (tonight),” he added. “You get down six, and you start to wonder (if we can come back. When we started the game, I told our assistants, ‘I don’t know if we are scared to death or if we were ready to play. I think the first few minutes we were scared to death but then we settled down and played.’

We really played well. We were down six and we stepped up. That’s what we’ve got to do. We want to change the culture here and we fought back to win this game no matter what the circumstances were.”

After getting off to a slow start, Sizemore never hesitated to shoot the ball when his team needed him the most. His 3-pointer with under a minute remaining cut North Laurel’s deficit to 87-86 while his 3-pointer with 13 seconds remaining ended up giving his team the two-point win.

“Clay Sizemore couldn’t throw one in the ocean at the first part of the game but then he made some huge shots,” Valentine said. “That’s what good teams do. That’s what happens when you work hard. These kids have a lot of confidence in each other right now.

“When the coaches stand in the gym and we watch Clay make 3, after 3, after 3, and every time he shoots the ball (in the game) we think it’s going in,” he added. “If he misses four then we think he’s going to make the next 14. We have confidence in him, and obviously, his teammates have confidence in him. I thought he showed a lot at the end hitting some big shots there at the end. I’m really proud of him.”

And when it counted most, Sheppard was Sheppard. He fought the hot-hand in the first quarter and the Colonels couldn’t figure out a way to stop him.

Sheppard was chased, double-teamed, and even tripled teamed at times but still found a way to score at least 40 points for the second consecutive game. He is now averaging 43.3 points per game this season.

“They made it really hard on him tonight by putting a lot of athletic strong players on him,” Valentine said. He knows the other team is coming after him.”

North Laurel will now shift its focus to Friday’s road game against Jackson County before hosting Rockcastle County on Saturday at 4:30 p.m.